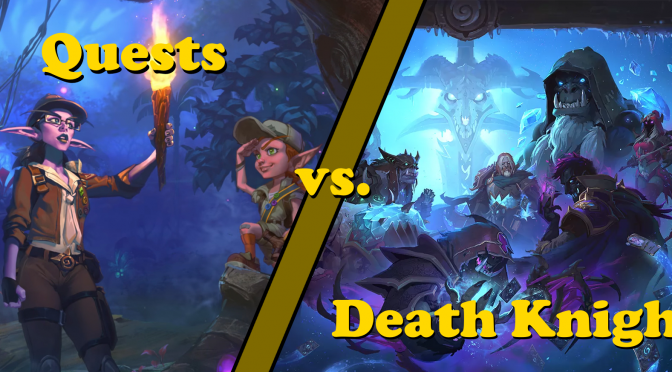 The most iconic cards of their respective expansions, the Quests from Journey to Un’Goro and the Death Knight Hero Cards from Knights of the Frozen Throne are very similar in concept. The Quests are class-specific Legendary Spells that completely define the decks they’re played in, while the Death Knight cards are class-specific Legendary Hero Cards (a new type of card) that are the cornerstone of their decks.

Because of these traits, both Quests and Death Knights have played a pivotal role in many of the decks that have appeared recently. As a result, there’s only one question left to be asked: which type of card is better? To answer this important question, I’m going to compare Quests and Death Knights in several different categories in order to see which of them is truly the most powerful card type in Hearthstone.

Quests: One-Mana Legendary Spells, Quests always start in your opening hand so they can be played on turn one. Depending on which of the nine Quests you’re running, you’ll then have to accomplish a specific goal—such as discard 6 cards or play 7 minions with Taunt—in order to receive a powerful reward. These rewards are 5-mana cards (with the exception of the Warrior quest reward) which do incredible things.

Death Knights: Legendary Hero Cards, the Death Knights range in cost from 5-mana to 10-mana. When played, the Death Knight will actually replace your current hero, grant you 5 armor, change your hero power into something new, and somehow affect the board state in a major way (such as equipping a powerful weapon or summoning all of your Demons that died so far in the game).

Quests: The most powerful Quests are Fire Plume’s Heart and Open the Waygate. The rewards you receive from these Quests (Sulfuras and Time Warp, respectively) are incredibly powerful and are their decks’ main win conditions. The Caverns Below used to be on this tier as well, until it got hit by the nerf bat and dropped out of contention.

As good as these Quests are, however, some of the others are on the complete opposite side of the spectrum. Lakkari Sacrifice (the Warlock Quest), Jungle Giants (the Druid Quest) and The Marsh Queen (the Hunter Quest) are all easy enough to complete, but their rewards are very weak. The Imps generated from the Nether Portal (Lakkari Sacrifice’s reward) die too easily to board clears or zoo decks, and while the 5-mana 8/8 stats of Queen Carnassa and Barnabus (the rewards for The Marsh Queen and Jungle Giants, respectively) are kind of good, their effects just aren’t very strong.

Finally, in between these six quests, there are three more (The Last Kaleidosaur, Awaken the Makers and Unite the Murlocs) which are neither insanely strong nor very weak. While the rewards from Awaken the Makers and Unite the Murlocs are good, they aren’t really game-winning. As for The Last Kaleidosaur, while Galvadon (the reward) is incredibly strong, the Quest itself is difficult to complete reliably. As a result, these three Quests—while not as useless as Lakkari Sacrifice, Jungle Giants or The Marsh Queen—aren’t the type of cards you’d run in top tier decks.

Death Knights: While only one of the Death Knights (Shadowreaper Anduin) possesses the game-ending power of Open the Waygate or Fire Plume’s Heart, all of the Death Knights are strong in their own ways. Bloodreaver Gul’dan, Malfurion the Pestilent and Frost Lich Jaina grant their users board presence and late-game healing; Uther of the Ebon Blade and Scourgelord Garrosh receive powerful weapons; Deathstalker Rexxar and Valeera the Hollow gain infinite (or near-infinite) value; and Thrall, Deathseer grants some cheap, early-game tempo.

All of these cards are very good for their mana cost, which means that they can all be safely run in nearly every deck that isn’t an aggro deck.

Winner: Tie. While the high-end Quests are more powerful than the Death Knights, most of the Quests are a bit worse. As a result, the average power level of the two types of cards is about the same.

Quests: By their very design, Quests require a lot of deck dedication. If you want to complete Open the Waygate, you’ll need to include lots of ways to get additional Spells, while if you’re playing Fire Plume’s Heart, you’ll need to add lots of Taunt minions. As a result, you can’t just add a Quest to your deck—you have to build your deck specifically around it.

Death Knights: Unlike Quests, most of the Death Knights require little to no deck dedication. Of course, there are things you can do to make them work better, such as include lots of cheap cards for Shadowreaper Anduin or toss in a bunch of Demons for Bloodreaver Gul’dan, but even these cards are pretty good without any support.

Winner: Death Knights. You can slot Death Knights into nearly every non-aggressive deck, which makes them a bit more versatile.

Quests: While the Quests only cost one Mana, their main cost is in cards. By keeping a Quest in your opening hand, you’re reducing the number of tools you have to work with in the early game. In some cases, this won’t make much of a difference, but in many cases (especially when playing against aggressive decks), sacrificing that card can cost you the game.

Death Knights: Death Knights cost a lot more than Quests, with the cheapest (Thrall, Deathseer) costing 5 Mana and the most expensive (Bloodreaver Gul’dan) priced at 10 Mana. Despite this, however, Death Knights don’t cost a card in your opening hand (unless you happen to pull them after the Mulligan), which means that they don’t hamper your early game while still being available late.

Quests: Because they start in your hand, getting Quests into play is incredibly easy. The trick comes in trying to complete them. For some of the Quests, such as Fire Plume’s Heart, it’s pretty easy to get all the cards you need; on the other hand, Quests like The Last Kaleidosaur can be very difficult to complete. On the whole, however, Quests are usually pretty consistent from game to game.

Death Knights: Because they don’t start in your opening hand, Death Knights can be a bit hit or miss. Fortunately, because most of them are late-game cards, you have a bit of time to go through your deck to look for them. Even with this caveat, however, Death Knights are still a bit less consistent than the Quests.

Winner: Quests. While Death Knights can be drawn with time, they can’t beat the reliability of always having your Quest in your opening hand.

Quests: Because of how dependent Quests are on having just the right synergies to work with them, you’ll need to craft a lot of (potentially very expensive) cards in order to get the most out of the Legendary Spells.

Death Knights: Because of their versatility, Death Knights can be run in any deck, even if you have nothing but Basic Cards. This means that players without any money can easily build good decks around any of the Death Knights they open.

Winner: Death Knights. Unlike Quests, Death Knights can be used without any supporting cards, which makes them a lot more viable for Free-to-Play players.

Even though Quests have the potential to be a bit more powerful, most of them fail to live up to their expectations. Only two of the nine Quests are actually playable in reasonably high-tier decks, and those require a large amount of supporting cards. On the other hand, all nine of the Death Knights are powerful and are all viable on the ladder. In addition, Death Knights—while not quite as consistent as Quests—cost fewer resources to play, and are much easier for Free-to-Play players to build decks around.

So, what do you think of this competition? Do you agree that the Death Knights are the more powerful cornerstone cards, or are you a fan of the Quests? Tell me what you think in the comments below, and I’ll see you on the ladder!