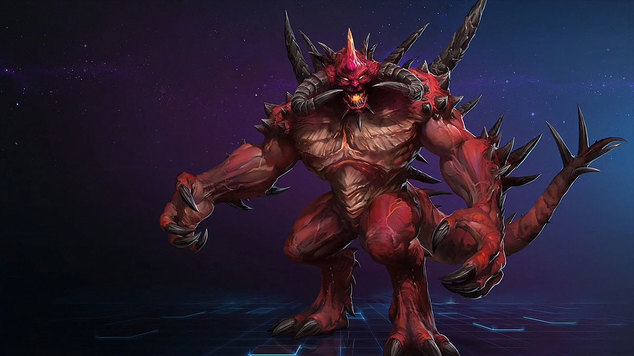 Hero Overview is a series that introduces readers to the Heroes of the Storm. This time, we’re going to be talking about Diablo, a Melee Warrior from the Diablo Universe.

(This post is a continuation from last week’s article, which can be found here: http://nexustipsandtales.com/hero-overview-diablo-part-1/) 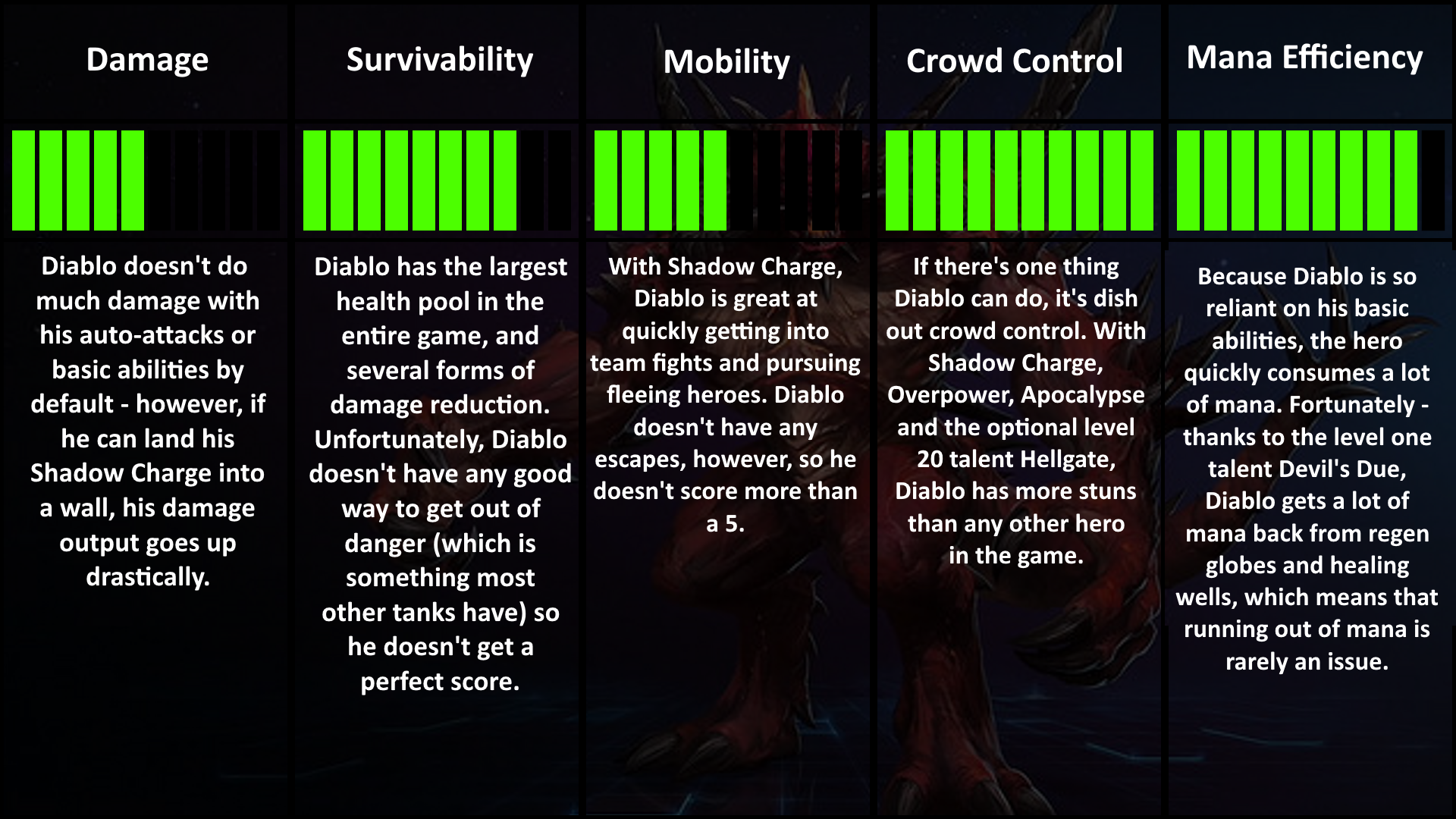 Diablo is a durable Melee Tank who uses his massive hitbox and numerous crowd-control tools to dive the enemy team and mess up their positioning. With Shadow Charge, he can get into the team fight quick before using Overpower to pull a vulnerable enemy hero out of position. In addition, at 100 souls Diablo has the most health of any hero in the entire game (including Cho’Gall), so he can last a surprising amount of time in the middle of a battle.

Diablo has a very diverse talent tree, as for three of the first four talent tiers (levels 1, 7 and then heroic abilities at 10) all of the talents can fit into any playstyle. At levels 4, 13 and 16, however, the talents promote two very different builds: the Shadow Charge/Overpower build and the Fire Stomp build. Both of these builds play out very differently, and are good or bad in different situations.

For the Shadow Charge/Overpower build, Diablo takes the From the Shadows talent at level 4 (which massively increases the range of Shadow Charge) and the Devastating Charge talent at level 13, which causes Shadow Charge to do up to 15% percent of the target’s health in damage if Diablo can knock them into a wall. This can amount to an insane amount of damage, especially when combined with the level 16 talent, Domination, which resets the cooldown of Shadow Charge every time you use Overpower.

For the Fire Stomp build, Diablo can take anything at level four, before selecting the Fire Devil (which increases Diablo’s auto-attack damage and gives him a damage aura every time he uses Fire Stomp) or Hellfire (which causes Fire Stomp to deal extra damage for every hero it hits) talents at level 13. Fire Devil is generally the better choice, as it provides Diablo with more consistent damage, but Hellfire can work if the other team is clumping up enough. Then, at level 16, this build takes Debilitating Flames, which slows enemies hit by Fire Stomp for 15-30% (depending on how many times they get hit) for 2 seconds.

The Shadow Charge/Overpower build is very strong on maps with tight lanes and jungle, such as Tomb of the Spider Queen and Cursed Hollow. On large, open maps such as Battlefield of Eternity, however, the Fire Stomp build will often pay off more. In addition to these two builds, Diablo can also take utility talents at any level (except for 13) to improve his survivability when playing with and against certain team compositions.

At level one, he has Devil’s Due (which massively increases the effects of healing globes and healing fountains) and Life Leech (which causes his auto-attacks to deal an additional 1% of the target hero’s health and heal Diablo for 1% of his health). Devil’s Due is usually the better talent, as having every health globe heal you for 50% of your maximum health is very good in nearly every circumstance. Against a team with multiple high-health tanks (such as Stitches, Cho’Gall or another Diablo), however, Life Leech can give the Lord of Terror just enough sustained healing to stay alive.

At level seven, Diablo has Soul Shield (which grants the Lord of Terror a massive amount of Spell Armor depending on how many souls he’s collected) and Diabolical Momentum (which decreases the cooldown of Shadow Charge and Overpower every time he auto-attacks). Diabolical Momentum is generally the better choice, as it massively increases the hero’s disruption ability, but against teams with one or two mage-type heroes (such as Kael’thas, Jaina, Li-Ming or Chromie) Soul Shield can be amazingly strong, as at 100 souls, it basically nullifies nearly all of their damage.

At level 10, Diablo has to choose between Apocalypse and Lightning Breath. Both ultimates are strong, but in very different situations. Apocalypse is best used on tight maps with lots of narrow passages (very similar to maps that you’d want to use the Shadow Charge/Overpower build on) while Lightning Breath is more based on the enemy team composition, as it can be used to dissuade dive heroes or get out of imminent stuns.

At level 13, all the talent options are build-based, but at level 16, Diablo has the option to leave the traditional talent build and take Fearful Presence. This talent passively reduces the auto-attack speed of heroes attacking Diablo by 20% and gives Diablo an active ability that reduces the damage of all nearby heroes by 30%. This talent is somewhat situational, but if the other team is running several auto-attack assassins (such as Raynor, the Butcher and Valla), it can be a great choice.

At level 20, Diablo has four very viable talents to choose from: Dying Breath (which reduces Apocalypse’s cooldown by 20 seconds and casts it for free when Diablo dies), Hellstorm (which increases the duration and area of Lightning Breath by 50%), Lord of Terror (an active ability that steals 10% of the maximum health of all nearby enemy heroes and transfers it to Diablo) and Hellgate (which teleports Diablo a short distance and places a demonic rune at the target location, which functions similarly to the runes from Apocalypse).

Dying Breath is a very good talent if Diablo is dying a lot—however, if Diablo is staying alive (or if he took Lightning Breath) then the talent is virtually useless.

Hellstorm increases the power of Lightning Breath, so it’s very good if Diablo is in a situation where he’s getting a lot of usage out of the ultimate. If Diablo is never able to fully cast the ability, however (or if he took Apocalypse), then another talent will probably be better.

Lord of Terror is a very strong talent for team fights, as long as the other team has at least two warriors or high-health heroes. If Diablo’s enemies are only running one or no tanks, however, then Lord of Terror will often struggle to get any value.

Finally, Diablo has Hellgate, which is almost always a good choice, because it gives the hero even more crowd-control tied to a powerful movement ability. When used in combination with Shadow Charge or Overpower, Hellgate can often secure kills that the other team could never have expected. In addition, the talent gives Diablo a great escape ability, which is something he doesn’t normally have.

Diablo is very strong against melee assassins such as Illidan or Greymane, as he can stun them long enough for his team to pick them off. He’s also very good at dealing with mage heroes like Kael’thas, as they don’t have a good way to escape once Diablo pulls them out of position, and he can virtually nullify their damage with Soul Shield. Finally, Diablo is surprisingly good against other tanks, thanks to the percentage-based damage he can get off of Life Leech and Devastating Charge.

On the other hand, Diablo struggles against auto-attack focused heroes such as Raynor and Valla, as he doesn’t have any form of basic-attack mitigation until level 16. In addition, because of how high Diablo’s health pool is, he is very weak against any heroes who deal percentage-based damage, such as Malthael or Leoric. Finally, Diablo is somewhat weak against teams with a lot of stuns and crowd control, as he doesn’t have any real way to deal with these aside from Lightning Breath.

Diablo performs the best with heroes who possess forms of crowd control, such as Tyrande, Arthas or Kael’thas, as they can set up his combos. In addition, powerful burst damage assassins like Chromie or Jaina do very well with Diablo, as they can capitalize on the opportunities he creates. As for healers, he prefers ones that put out large amounts of burst healing (like Auriel) or large heals-over-time (like Malfurion).

Overall, Diablo is a very powerful warrior, and is very good at shutting down all the dive compositions that are so common in the meta right now. He’s also a lot of fun to play, so if you’re looking for a new tank to run, he might be just what you need!

Hope you enjoyed the article, and I’ll see you in the Nexus!