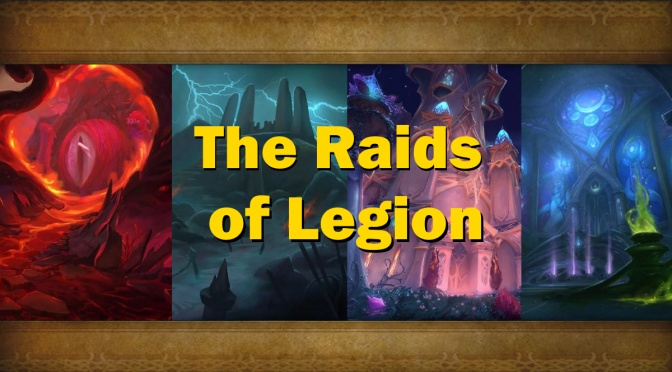 Legion, the sixth expansion for World of Warcraft, is nearing its end. The final raid of the expansion (Antorus, the Burning Throne) will release in just a couple months, and with it we shall defeat the Burning Legion once and for all. While we wait for that moment to arrive, however, I thought it’d be a great time to look back at the raids that have come so far in Legion and see how I’d rank them.

Description: The Emerald Dream was created by the titans as a blueprint for Azeroth itself – a verdant and perfect mirror that reflects the state of nature had it remained unspoiled by so-called civilization. For many years, the druids and keepers have noticed signs of an unsettling presence stirring within the Dream. Spurred on by the Legion and Nightmare Lord Xavius, that creeping corruption has now burst forth, and will engulf all of Azeroth if it is not rooted out at its source.

The first raid of Legion, Emerald Nightmare is located inside the corrupted world tree Shaladrassil in northern Val’Sharah. A typical introduction raid, Emerald Nightmare only featured seven bosses, all of which were pretty easy. In fact, the raid was so easy that the first guild to clear Emerald Nightmare on Mythic managed to do so in a single day, which isn’t supposed to happen.

Despite how easy it was, Emerald Nightmare was actually a pretty good raid. Even though the last boss (Xavius) was a bit underwhelming, several of the earlier fights (such as Il’gynoth, Hearth of Corruption and Cenarius) were actually very well-designed fights, and were a lot of fun to do.

The main issue I personally have with the raid, however, is the predominance of the colors red and black. On the one hand, I understand it—as the whole theme of the Emerald Nightmare is red and black—but I quickly got tired of the theme, which made the rest of the raiding experience difficult to enjoy after a while.

As a result, while Emerald Nightmare had some interesting encounters, it just wasn’t as good as the other raids in the expansion.

Description: Since Loken’s betrayal, Odyn has been trapped within the Halls of Valor as Helya plots in the shadows to claim the souls of his valarjar champions. In recent days, however, great heroes have arrived in the lands of Stormheim in the Legion’s wake. Hoping that their might and determination could tip the scales and end Helya’s reign, Odyn summons these champions for a final test.

The second raid of Legion, Trial of Valor is located inside the Halls of Valor in the southeast corner of Stormheim. The shortest raid in Legion—containing only 3 bosses—Trial of Valor is best thought of as an addition to Emerald Nightmare, rather than a completely unique experience. This is because the raid’s loot is only 10 (or 15, in the case of Helya) item levels higher than what you’d find in Emerald Nightmare at the same difficulty level, and the bosses are much more complex and difficult, a trait that is typical of the end bosses of a raid.

Both Odyn and Helya (the first and last bosses of the raid) were very difficult fights at the time, with Helya actually taking a couple days to defeat for the first time on Mythic. In addition, Trial of Valor dropped the first appearance sets from a raid, which all looked really good, even though they weren’t officially tier sets.

Finally, I really liked the atmosphere of Trial of Valor. You start out in the holy Halls of Valor, before descending into the murky depths of Helheim. This is a huge shift in scenery, which I like, and the color scheme was just easier to look at than Emerald Nightmare’s was. Overall, Trial of Valor was a pretty good raid, and it’s easily one of my favorites.

Description: The largest structure in the Broken Isles, and among the grandest in all of Azeroth, the Nighthold stands as a testament to the achievements of the Nightborne civilization. Centered around the Nightwell, the fount of arcane power that has sustained Suramar for centuries, these grounds were built as a haven from the worries of the world. But as a felstorm churns above the former temple of Elune across the bay, and Gul’dan himself now resides within the palace’s walls, those worries now begin, not end, here.

The third raid of Legion, the Nighthold towers over the bay of Suramar City in the southern part of Suramar. Being the first raid to feature tier gear (armor that grants the user special bonuses if they can collect multiple pieces), Nighthold is also the largest raid in Legion so far, with 10 bosses to kill throughout the large Nightborne citadel.

Featuring some of the hardest bosses in Legion (Gul’dan, Grand Magistrix Elisande, Star Auger Etraeus and High Botanist Tel’arn are the four that immediately come to mind) the Nighthold was a lot more challenging than the raids preceding it. For some, this was a good thing, as Emerald Nightmare (the last big raid) had been a bit of a let-down as far as boss difficulty went.

For others, however, the difficulty of the fights was a bit of a turn-off, as it made quickly clearing the instance hard to do. Another contributor to this issue was the sheer number of difficult trash mobs that needed to be cleared in order to progress through the instance. As a result of these two obstacles, there were a lot of people who grew fatigued of Nighthold, and quit raiding until the next instance was released.

I actually enjoyed Nighthold, however, as it was the coolest-looking raid so far, the bosses were challenging to defeat, and there were some really epic moments (such as Illidan disenchanting Gul’dan). As a result, it’s my favorite raid in Legion, a spot that will remain secure until Antorus arrives.

Description: Aegwynn used this sacred temple of Elune to lock away the defeated Sargeras’ avatar. She hoped it would remain dormant, buried deep within the earth, but the lure of power has continued to draw foul entities to this site. When Gul’dan re-entered the tomb, he tore down Aegwynn’s wards and opened a doorway for the Legion to invade. Now, the fel army tears at the vault, hoping to reclaim their master’s power.

The fourth—and most recently released—raid in Legion, the Tomb of Sargeras sits directly across from the Nighthold, near the northern tip of the Broken Shore. Containing nine bosses (which is one less than the number found in Nighthold) the Tomb of Sargeras is very similar in difficulty to Nighthold—but not in a good way.

Nearly every single one of the bosses has some kind of soak mechanic, which requires players to share a large amount of damage to prevent something worse from happening. Now, on its own, this isn’t a terrible mechanic, but when nearly all the bosses have this mechanic, it forces players to bring classes such as Rogue in order to survive. As a result, the raid has earned the nickname ‘Tomb of Soak-geras’, and is the subject of a lot of hate as a result.

Despite this, however, Tomb of Sargeras isn’t actually a terrible raid. While some of the bosses are a bit frustrating, a lot of them are actually really cool, and the whole atmosphere of the raid is pretty cool. As a result, the raid—while not quite as good as the Nighthold or Trial of Valor—is still an okay raid.

So, what are your thoughts on this list? I know a lot of you will disagree with my picks, so please, leave a comment explaining why. Thanks for reading, and I’ll see you battling the Legion on Argus!