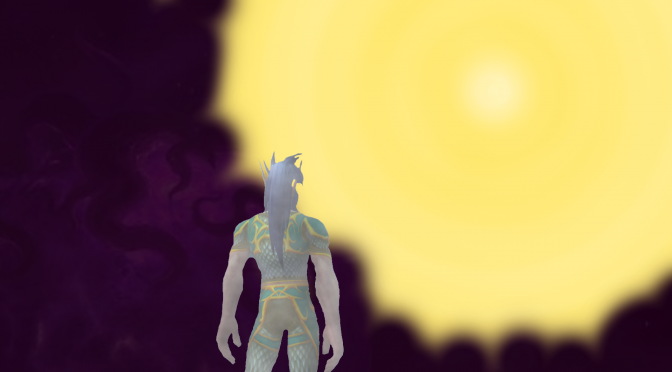 Blackness. Everything was Blackness. Linaeum drifted through the void, lost in space and time. He distantly remembered a time before the darkness, but whenever he reached out for the memories they’d scurry away, taunting him from the edges of his mind.

Whispers clawed at his consciousness, luring him with their smooth tones and appetizing words. Linaeum fought back the best he could, but his tormenters were insidious, and every time, he found it harder to drive back the madness.

Eventually, the whispers became too hard to resist, and Linaeum was about to give in—but then, everything changed.

The first thing Linaeum felt was the heat. It wasn’t hot and ravaging like the flames of a fire, but rather warm and soothing, like the gentle touch of the summer sun’s rays. Then came the light. Radiant and beautiful, it shone through the darkness, pushing back the whispers.

Freed of his oppressors, Linaeum basked in the light, letting it cleanse him of the darkness that had surrounded his soul for so long. For what felt like hours, the former high elf Ranger absorbed the healing rays, but then, suddenly, a voice said, “Linaeum, are you there?”

For a moment, the elf feared that the voices had returned, but this voice was warm and comforting, like the light, while the whispers had reeked of the void. “I’m here,” Linaeum replied, his momentary fear dissipating like dust in the wind. “Where are you?”

“I’m all around you,” the warm voice replied cryptically. With a start, Linaeum realized that the voice was coming from the Light! “Linaeum, do you know where you are, and how you got here?”

“I remember…a battle,” the Ranger replied after several seconds of thought. “There were trolls, and elves, and…and I was stabbed! I died!” For a moment, the horrific whispers touched at the edges of the elf’s consciousness, before being driven back by the light once more.

“Yes, Linaeum, you were killed,” the Light confirmed, “But your death was not in vain. Thanks to your actions, the civilians of Suncrown Village were spared from a horrible demise. You were a hero…” A feeling of relief filled Linaeum’s mind, as he realized that his sacrifice had been worth it. Closing his eyes, he took a deep breath…which he then violently expelled, as the Light finished, “And you shall be many times in the future.”

“Wait, what?” Linaeum asked, looking confused. “But if I’m dead…”

“Your death, while noble, was premature,” the Light explained. “You still have a role to play in the fate of the universe—a role that cannot be stopped by something as simple as death. Now awake, Linaeum, and be reborn!”

The young elf opened his mouth to ask a question, but then there was a brilliant burst of light, followed immediately by total darkness. For a moment, Linaeum felt a touch of panic—had the void come to reclaim him?—but then his eyes came into focus, and he realized he was looking up at the night sky.

Taking a deep breath, Linaeum sat up—and was immediately greeted by a series of loud gasps. “Linaeum, you’re alive!” Looking around, the high elf saw Caladthras and Daelenar kneeling beside him, their faces plastered with an expression of joy. “We thought you had died!”

“I…I think I did,” the raven-haired Ranger mumbled, “I remember a void, dark and empty, a sea of madness where I drowned for an eternity.” Daelenar and Caladthras exchanged a look of worried confusion. Had their friend gone insane?

“But if you died, how are you alive now?” Daelenar asked.

“The Light,” Linaeum replied simply, “I was saved by the Light.”