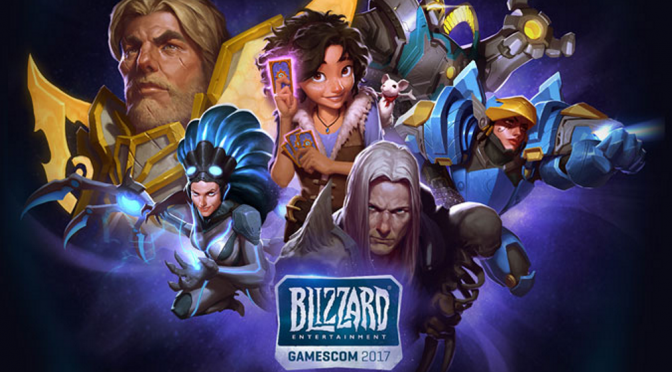 Gamescom, one of the largest European gaming conventions, has been going on for several days at this point, featuring huge announcements from many different gaming companies. On Wednesday, it was Blizzard’s turn, and they did not disappoint. New content was revealed for nearly every one of their major franchises, all of which I’ll cover in the sections below.

Knights of the Frozen Throne was released just a few weeks ago, so no one was really expecting any real announcements—which meant that everyone was surprised when the Hearthstone team debuted a new cinematic entitled “Hearth and Home”.

In this cinematic, a young girl named Ava finds a Hearthstone box on the ground in a frozen forest. Upon touching the box, Ava is teleported to the Hearthstone Inn, where she is met by a large cast of friendly characters, who tell her that ‘Hearthstone is Home’. This cinematic is of a much higher quality than the previous Hearthstone animations, and according to the Hearthstone team, several more videos and comics featuring these characters will be released in the months to come.

Heroes of the Storm

It’d been several weeks since Garrosh was released, which meant that Heroes of the Storm was due for another character. Due to the prominence of Gamescom, everyone was hoping that we’d get a famous character, and we were not disappointed, as the Archlich Kel’thuzad was revealed to be the next hero coming to Heroes of the Storm!

In addition to the arrival of this powerful new hero, Heroes of the Storm will also be getting several new skins (Dreadlord Jaina, Death Knight Sonya and Crypt Queen Zagara) and a new event, the Call of Kel’thuzad. During this event, players will be able to unlock several brand new cosmetic items by securing 30, 60 or 90 takedowns in Heroes of the Storm Matches.

Finally, it was announced that Blizzard will be releasing a 5-part documentary entitled ‘Resurrecting Kel’thuzad’, which will show much of the process involved in bringing this much-loved character to Heroes of the Storm.

Overwatch also got quite a lot of content, including a pair of new animated shorts and a brand new map! The map, Junkertown, is set in Australia, and showcases the home of everyone’s favorite criminal duo, Junkrat and Roadhog. Junkertown is an Escort map that starts in the Australian desert before entering a futuristic domed city full of guns and gold.

To go along with this new map, we got a new animated short entitled “Junkertown: The Plan”. This short is more of a trailer than an actual animated short—as its quality isn’t quite as good as that of the other cinematics—but it’s still a lot of fun to watch.

In addition, we got a second animated short called “Rise and Shine”, which features Mei, the Chinese climatologist. Unlike “Junkertown: The Plan”, “Rise and Shine” is an actual cinematic, and it shows what happened to Mei after she was woken up from her cryosleep.

StarCraft announced a brand new Co-op Commander in the form of Dehaka, the Primal Zerg leader. Like most of the other Zerg commanders, Dehaka appears as a hero on the battlefield, and while he starts out on the weak side, if he can consume enough of his enemy’s essence he will quickly turn into an unstoppable juggernaut of destruction. In addition, Dehaka commands large packs of Primal Zerg, which he can use to destroy his enemies while he builds his own strength.

Some people were hoping that the next expansion for World of Warcraft would be announced at Gamescom, but it was not to be, as we instead got a detailed description of Patch 7.3. In this patch—which is entitled “Shadows of Argus”—we are going to travel to the Legion’s homeworld and end their threat once and for all.

At Gamescom, we learned about all the story elements coming in this patch, such as the three new zones on Argus (Krokuun, Mac’Aree and the Antoran Wastes) and the two new factions, the Army of the Light and the Argussian Reach. Both of these factions have a large number of special items you can purchase from them as your reputation goes up, so grinding reputation with them will bea  top priority.

The game will also be getting a new feature called Invasion Points, where players can use large portals to teleport to Legion-controlled worlds and battle the demons there. These worlds include a Blood World, a Fire World, an Ice World and a March World, and if you can defeat all the demons on these planets, you’ll receive powerful items as a reward.

In addition, a new progression system will be coming in 7.3, which will allow you to empower your relics with the aid of a device called the Netherlight Crucible. This means that players will be able to modify their artifact relics, which should help to improve the power-level of previously weak relics.

Finally, World of Warcraft will be getting a new dungeon (Seat of the Triumvirate) and a new raid (Antorus, the Burning Throne), which will be coming out some time after the patch releases on the 29th of August.

Overall, there was a lot of really exciting stuff announced at Gamescom, and I can’t wait to check it all out! What do you all think of these exciting announcements? Leave a comment below with your thoughts!