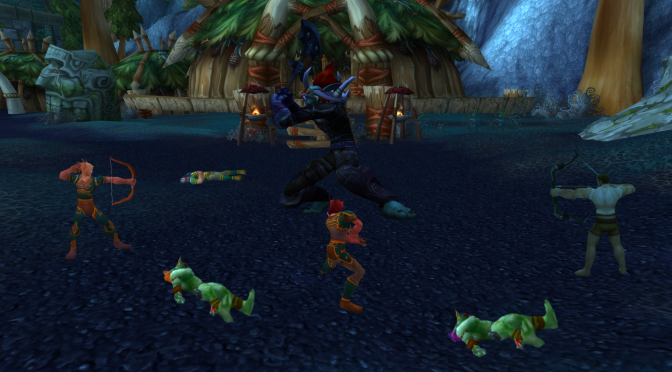 “No!” Caladthras screamed as the wicked blade pierced his brother’s body. Raising his bow, he fired an arrow right into the Amani chieftain’s chest. There was a meaty ‘thunk’ as the bolt made impact, but if the elf was hoping for the troll to be slain by this shot, he was sorely mistaken.

Laughing, Vul’garak pulled the arrow from his chest and crushed it in his giant fist. “I tol’ ya,” he declared, “Ya little bow be useless against me. Now, ya all gonna die.” Throwing the mortally wounded Linaeum to the side, the massive troll pulled a colossal battle-axe from his back and charged forward.

Caladthras and Nathanos opened fire on the Amani chieftain as Daelenar leapt forward to engage. Dodging the gigantic troll’s first attack, the Ranger sliced into his enemy’s leg with a powerful swipe. Bellowing in pain, Vul’garak swung his axe sideways, aiming the haft straight at Daelenar’s head.

Leaning backward, the high elf attempted to avoid the attack. The Ranger was still slightly off balance from his last strike, however, and the butt of the axe’s handle hit him right in the forehead. Knocked off his feet, Daelenar went airborne for a second or two before slamming back into the ground with a massive ‘thud’.

“Hah, didja tink ya could beat me?” the gigantic troll laughed, brushing away the arrows that littered his body as he slowly walked up to the fallen high elf, “Now, ya gonna join ya friend in death.”

Sprawled out on the ground twenty yards away, Linaeum watched helplessly as the massive Amani chieftain prepared to finish off the fallen Ranger. Caladthras and Nathanos were firing wildly into the troll’s body, but they weren’t slowing the chieftain’s advance by even a second. “It’s up to me,” Linaeum realized, “I have to save my friend.”

Grabbing an axe from a fallen troll, the high elf staggered to his feet. “Vul’garak!” he roared, raising the weapon with both hands, “You forgot to finish me!” Turning, the Amani chieftain opened his mouth to speak—just as Linaeum hurled the axe with all the strength he could muster. The weapon spun three times before embedding itself in the troll’s head with a fleshy ‘thunk’.

Screaming in pain, Vul’garak stumbled backward. Dropping his battle-axe, the troll scrabbled at his face in an attempt to remove the weapon. “You will pay for this,” the chieftain declared, the words filled with pain. “Zul’jin…will…avenge me!”

“Avenge this!” Daelenar declared, and struggling to his feet, he drove both swords right into the chieftain’s back. The gigantic troll let out one final cry of anguish before collapsing to the ground in death.

For a moment, the four heroes stood there in absolute silence, but then, Linaeum collapsed to the ground. “Linaeum!” Caladthras exclaimed, leaping down from his perch and running over to his fallen brother. A second later, he was joined by Nathanos and Daelenar, and together, the three kneeled down beside the wounded elf.

“It’s okay, Linaeum,” Caladthras repeated, placing a gentle hand on his brother’s shoulder. “You’re going to be okay. Reinforcements are on the way, and…”

A heavy fog descended over Linaeum’s mind. A distant horn rang out, but he paid it no attention. “Good-bye…brother,” he whispered, and then everything went black.