Hero Overview is a series that introduces readers to the Heroes of the Storm. This time, we’re going to be talking about Malthael, a Melee Assassin from the Diablo Universe.

The Archangel of Wisdom and the first leader of the High Heavens, Malthael has battled against the armies of the Burning Hells for as long as anyone can remember. Alongside his brethren—the Archangels Tyrael, Imperius, Auriel and Itherael—Malthael even defeated the mighty Lord of Terror, Diablo on the world of Pandemonium and recovered the Worldstone contained within.

Intrigued by the power present in the Worldstone, Malthael rigorously studied the artifact—right up to the time when it was stolen by a band of thieves led by the angel Inarius and the demon Lilith. Together, these villains used the Worldstone to create the world of Sanctuary, the home of the Nephalem.

Unable to locate the stolen Worldstone (because of the protective barrier that hid Sanctuary and all it contained), Malthael’s mood darkened, and he became even more withdrawn than usual. Eventually, Sanctuary was revealed, and Malthael went to retrieve his prize—but before he could recover the artifact, the Worldstone was destroyed by Tyrael in an attempt to keep its power out of the hands of darkness.

Giving up his position as a leader in the Heavens, the angel traveled throughout the worlds, trying to learn the answers to the mysteries of the cosmos. During his absence, a human hero defeated the Prime Evil, a feat that Malthael had never been able to accomplish during the entire Eternal Conflict. Instead of rejoicing in humanity’s triumph, however, the former Archangel of Wisdom saw their power only as a potential threat to the Heavens. Deciding he only had one option, Malthael became the Angel of Death and began planning to wipe out all of humankind.

Stealing the Black Soulstone (a shard of the Worldstone that contained the Prime Evil Diablo’s soul and power) from where Tyrael had attempted to hide it, Malthael formed an army of angels who shared his beliefs and used them to launch an attack on the city of Westmarch. While the human heroes were preoccupied with defending the city from the Reapers, Malthael began to modify the Black Soulstone into a superweapon, which he planned to use to wipe out humanity.

Unfortunately for the new Angel of Death, the Nephalem defeated the Reapers much more quickly than expected, and began to march on Malthael’s fortress. Needing more time to complete his plan, the former Archangel sent his remaining forces to destroy the Pandemonium Gate in the High Heavens in an attempt to stop the heroes from reaching his domain. This plan utterly backfired, however, for not only were his forces stopped, but this act of aggression against the High Heavens caused the angels to declare open war against Malthael.

With the aid of the remaining Archangels, the Nephalem breached the gates of Malthael’s fortress and attacked the Angel of Death. In a last-ditch attempt, Malthael absorbed the power of the Black Soulstone, granting the former Archangel immense strength. Even with this newfound power, however, Malthael was still unable to defeat the Nephalem, and he was ultimately slain.

Now, the Angel of Death has reformed in the Nexus, and he will not rest until all the denizens of the realms contained within are slain and their souls are his! 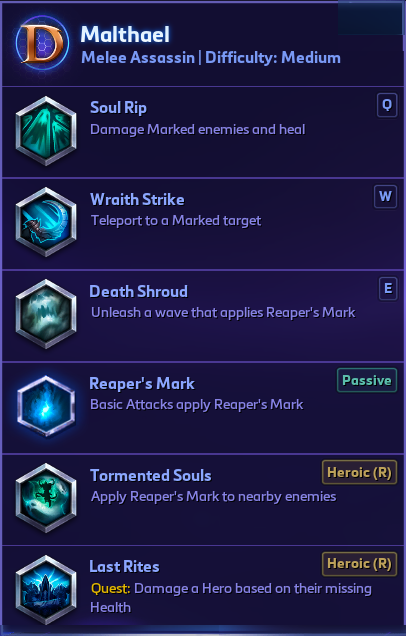 A debuff applied by the hero’s basic attacks on non-structure targets, Reaper’s Mark deals 2.5% of the target’s health every second for four seconds and reveals the target for that time. Much of Malthael’s kit revolves around applying Reaper’s Mark to enemies, so keeping the trait active for as much time as possible is incredibly important.

Malthael’s first basic ability is Soul Rip. This ability deals light damage to all nearby targets who are affected by Reaper’s Mark, and heals Malthael a little bit for every enemy damaged. If Soul Rip hits any enemy heroes, Malthael will also be healed for 3% of the damaged hero’s maximum health.

Wraith Strike, Malthael’s second basic ability, teleports the hero through an enemy affected by Reaper’s Mark, dealing light damage and resetting the remaining time on the trait. Wraith Strike is very good for chasing down low-health enemy heroes, or for escaping a team fight by teleporting to a minion.

Malthael’s final basic ability is Death Shroud, which launches a wave of dark mist in a long line. This ability deals no damage, but it applies Reaper’s Mark to every target hit, which makes it incredibly useful for team fights and clearing minion waves.

Malthael’s first heroic ability is Tormented Souls, which grants the hero 20 Armor (reducing all damage taken by 20%) and constantly applies Reaper’s Mark to nearby enemies for 4 seconds. Like Death Shroud, this is a very good ability for the beginning of team fights, and the added bonus of damage resistance makes it especially powerful.

Finally, Malthael has his second heroic ability, Last Rites, which deals damage to an enemy hero equal to 50% of their missing health. This is an excellent tool for finishing off low-health heroes—and the finishing off part is especially important, because enemies killed while under the effect of Last Rites will permanently reduce the abilities cooldown by 5 seconds, to a minimum of 15 seconds.

Malthael is a powerful Melee Assassin who uses the damage-over-time effects of Reaper’s Mark to chip away at his enemies, before diving in and dealing massive area-of-effect damage with a flurry of abilities. Because Soul Rip and Wraith Strike can only be used against targets affected by Reaper’s Mark, landing successful Death Shrouds and auto-attacks is essential for the hero to perform well.

Malthael isn’t overly good at dueling other assassins because his damage is based on percentage-based damage-over-time effects, rather than heavy sustain or burst. He’s very strong against tanks, however, as his Reaper’s Mark will quickly burn through their health pools.

The Angel of Death is also very effective at clearing minion waves, as Death Shroud will quickly apply Reaper’s Mark to all the minions in a group, at which point they can be quickly eliminated with a pair of Soul Rips and one or two auto-attacks. In this vein, Malthael is also very good at taking mercenary camps, as he can out-heal most of the damage they do. Finally, Malthael is very good at killing bosses and boss-type objectives, as he will often be given a lot of time to burn through their massive health pools with his Reaper’s Mark.

Malthael’s choice between Tormented Souls and Last Rites for his heroic ability will largely depend on the map and enemy team composition. If he’s facing a lot of heroes with little-to-no self-healing or shielding, Last Rites is amazing for finishing these targets off. On the other hand, if the other team has a lot of survivability tools, or the map is one that forces very tight team fights, then Tormented Souls can be useful for the sustained damage and survivability it provide.

As far as talents go, Malthael actually has a surprising number of good choices. At levels one and thirteen, all of his talents (Death’s Reach, On a Pale Horse and Fear the Reaper at level one and Soul Siphon, Ethereal Existence, Inevitable End and Shroud of Wisdom) have their own distinct uses, and will be better or worse in different situations.

In addition, there are several talents at different levels that synergize very well with each other. For example, the level four talent Black Harvest (a quest which increases the duration of Reaper’s Mark) synergizes very well with the level sixteen talent Memento Mori (which doubles the damage of Reaper’s Mark the longer it lasts) to burn down tanks, and the level four, seven, thirteen and sixteen talents (Die Alone, Cold Hand, Soul Siphon and Soul Collector, respectively) all work together to increase the power of Soul Rip and allow Malthael to deal a decent amount of single-target damage to assassins.

At level twenty, Malthael’s talent choices will largely depend on the map and team composition he’s facing. Against a team with very weak heroes such as the Lost Vikings or Murky, Reaper of Souls (which resets the duration of Tormented Souls every time it gets a kill) is a powerful talent choice.

Angel of Death (which causes Last Rites to heal Malthael for an amount equal to the damage it deals and halves the amount of kills he needs for the quest) is also a very good talent, as it provides Malthael with a large self-heal at the moments he needs it the most. If the other team is running a composition with lots of burst-healing and shields, however, Malthael may struggle to get his ultimate off, which makes it somewhat unreliable.

Final Curtain (which causes Death Shroud to leave a trail of mist along its line of fire, applying Reaper’s Mark to anyone who enters the area) is possibly the most powerful talent at level twenty, as it allows Malthael to control the battlefield by forcing enemy teams to back up or risk taking a lot of damage.

Finally, Malthael has No One Can Stop Death, which grants the hero an ability that lets him immediately respawn while dead, at the cost of causing his next respawn to take 25% longer. This talent is best used when your team is falling behind, and they need you to get back immediately. Because of the massive respawn increase on your next death, however, the talent is a bit dangerous, and should only be taken in the direst of circumstances.

Overall, Malthael is a very strong hero—however, he does have a few weaknesses. The first is his difficulty in initiating fights. Because he can only use Wraith Strike to teleport to enemies afflicted with Reaper’s Mark, he first has to land a Death Shroud, which can be a bit difficult to do. Then, once he goes in, he has no real form of escape (unless he takes Fear the Reaper at level one, and even then, he’s very susceptible to crowd control). To top all of this off, Malthael is relatively squishy, and can be burned down very quickly by his enemies.

As a result of these weaknesses, Malthael requires a very specific team composition in order to work. First, he needs a dive tank like ETC to stun the enemy frontline, which allows Malthael to land an easy Death Shroud. Next, Malthael needs a strong, dive-oriented dps to distract the enemy backline while he goes to work on their tanks and melee dps. Finally, Malthael needs a good burst healer like Auriel or Uther to keep him healed up until he can get his self-healing from Soul Rip going.

In the end, Malthael is a very powerful and fun melee dps, but he requires a specific team composition to survive engagements, and a specific enemy team composition to perform to the fullest extent. As a result, he isn’t something you’ll want to play in Ranked Play unless you build your team specifically around him. In Quick Play, however, he’s a lot of fun, so I’d highly recommend checking him out.