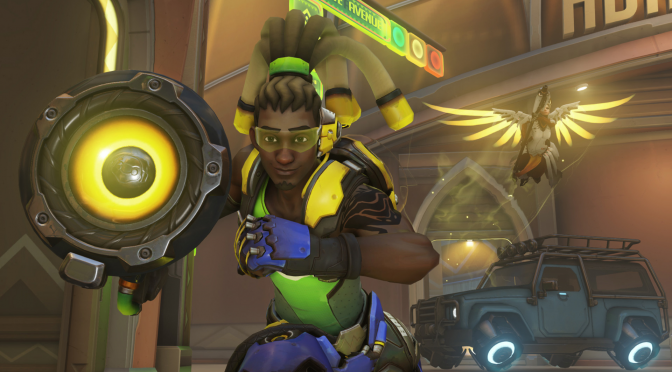 Hero Overview is a series that introduces readers to the Heroes of the Storm. This time, we’re going to be talking about Lúcio, the area-of-effect healer from the Overwatch universe.

Growing up in a poor neighborhood in Rio de Janeiro, Lúcio Correia dos Santos has always had a burning desire to help those around him. Taking up music, the young Brazilian began performing wherever there were people whose spirits needed lifting. Though humble in appearance, these impromptu concerts helped the community band together, as the people put their shared love for the music ahead of their quarrels and difficulties.

Over time, Lúcio’s fame grew, and he began performing in larger and larger venues. His music became a staple to all who lived in his community, and slowly, things began to get better. Putting aside their petty squabbles, the people of the neighborhood banded together to work for the betterment of them all. Things were looking up, but then the Vishkar Corporation—a powerful, multinational industrial developer—was contracted by the city to redevelop some of the poorer areas.

At first, this deal didn’t seem so bad, as Vishkar brought a lot of much needed technological advancements to the impoverished boroughs. However, events quickly went south, as Vishkar put the second phase of their plan into action. With the aid of their private army, Vishkar began imposing strict regulations on the civilians: curfews, random arrests, and even forcing many of the poorer citizens into outright slavery!

All these atrocities were done in the name of order, but Lúcio saw the truth. Vishkar was just using the people of Rio de Janeiro for its own profit, and had no intentions of actually bettering the lives of the civilians. Vishkar was putting the city in a stranglehold, and it wouldn’t be long before they destroyed it entirely. Lúcio had no choice but to act.

Breaking into a major Vishkar warehouse, Lúcio stole a powerful Sonic Amplifier that the villainous corporation had been using to terrorize the civilians. Modifying the technology to play his own inspiring music, Lúcio rallied the people of Rio de Janeiro, and together, they drove Vishkar out of the city.

Since then, Lúcio has become a world-wide celebrity, with his music skyrocketing in popularity. Now, the young DJ-turned hero has come to the Nexus, where he seeks to bring peace and harmony for all with his healing tunes. 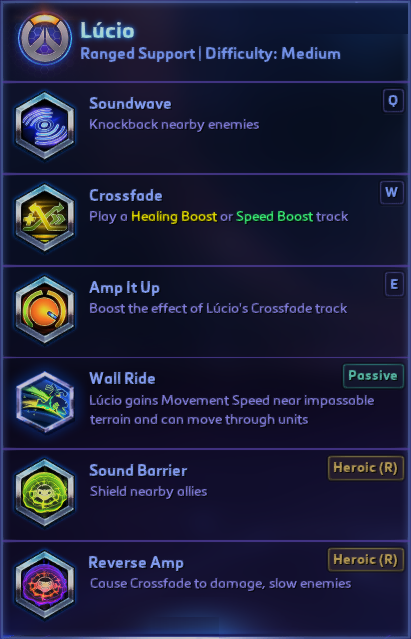 Lúcio’s trait is Wall Ride. While moving alongside impassable terrain and buildings, the hero will leap up and skate on the walls, granting him 20% increased movement speed and the ability to pass through other units. Wall Ride stacks with other movement speed abilities, so it allows Lúcio to get around the map quickly (which is very important because he doesn’t have a normal mount). In addition, Wall Ride can be used to escape from an ambush, as Lúcio can just Wall Ride through enemies who are attempting to block him in a corner. Finally, Lúcio can auto-attack while moving, so he gets some utility to make up for the lack of a mount.

Lúcio’s first basic ability is Soundwave. Lúcio fires a concentrated blast of sound from his Sonic Amplifier, which deals light damage in a cone and knocks all affected enemies away. This is a great tool for getting separation from pursuing heroes, as you can shove them away long enough for you to escape. In addition, you can also use Soundwave to knock fleeing enemies back into your team to secure the kill.

The second track Lúcio can play is Healing Boost, which heals Lúcio and nearby teammates for a small amount every second. The heal isn’t overly large—however, it’s always active and doesn’t cost any mana, so Lúcio can be constantly healing his allies throughout every teamfight.

Lúcio’s final basic ability is Amp It Up, which boosts the power of Lúcio’s music for 3 seconds. If Lúcio is using Speed Boost, he and his allies gain 45% movement speed instead of 15%, and if he’s using Healing Boost, the amount healed per second is massively increased. Both of these effects are very powerful, and can often mean the difference between winning or losing a teamfight.

Sound Barrier is Lúcio’s first ultimate, and it does the exact same thing here as it does in Overwatch. After one second (the time it takes for Lúcio to leap up and come back down), Lúcio and all nearby allies are given a massive shield that decays over 6 seconds. Like in Overwatch, this ability is perfect for blocking bursts of damage from enemies, and can be used to negate even the most powerful Wombo Combo.

Lúcio’s second ultimate is Reverse Amp. Lúcio blasts his music at enemy Heroes, granting them an effect opposite of his current track. If he’s using Healing Boost, they’ll take a small amount of damage every second, and if he’s using Speed Boost, they’ll all be slowed by 45%. In addition, Reverse Amp passively increases the duration of Amp It Up by one second.

Reverse Amp is a powerful tool in teamfights, as you can either use it to do constant damage to the other team or apply a slow that will make it harder for them to maneuver. In addition, the regular version of the current song will be playing for your team during the time Reverse Amp is active, so you don’t have to worry about weakening your own allies. One warning about this ability: Amp It Up does not affect the power of Reverse Amp, so don’t worry about saving it to couple with your ultimate.

Lúcio is a Ranged Support who either heals or boosts the speed of his allies through his Crossfade AOE. Because this AOE is always active, Lúcio can participate offensively in teamfights while still giving support to his allies.

Lúcio isn’t overly effective in the lanes, as his damage is relatively low—however, he is surprisingly good at bullying enemy heroes out of the lane (especially melee heroes without a good form of gap clear). He is also quite good as part of a gank squad, as he can use his speed boost to get behind an enemy before using Soundwave to knock them back into his team’s waiting arms.

Lúcio is a very interesting hero talent-wise, as many of his talents can be mixed and matched to produce a huge number of different builds. There are a few talents, however, that work best when paired with specific talents from other tiers. For example, the level one talent Slip (which massively increases movement speed when Lúcio Wall Rides near an enemy hero) works very well with the level 13 talent Can’t Stop, Won’t Stop (which makes Lúcio immune to Slows and Roots while Wall Ride is active).

Thanks to his constant healing, Lúcio is very strong against teams that rely on sustained damage or dealing damage over time. He’s also very strong against any melee characters without a form of gap closing, as he can shoot while moving. In addition, he can use Soundwave to push away enemies who get too close, and use Speed Boost to get away when his health gets low.

Unfortunately, Lúcio can only heal so much, so aside from Sound Barrier (which can only be used once per fight), he’s very weak against characters with lots of burst such as Kael’thas, Jaina and Li-Ming.

Overall, however, Lúcio is a very versatile character. His ability to boost the movement speed of allies is one of the most powerful abilities in the game, and his healing is nothing to sniff at either. As a result, Lúcio is a great hero, and you should definitely try him out.