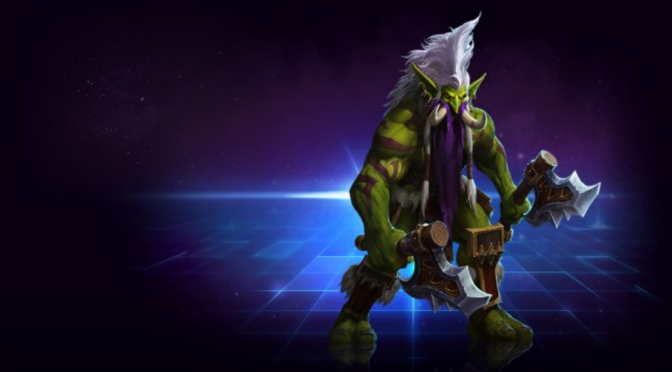 Hero Overview is a series that introduces readers to the Heroes of the Storm. This time, we’re going to be talking about Zul’jin, the Ranged Assassin from the Warcraft Universe.

Over time, the defeated Amani splintered, fighting against each other instead of against the powerful High Elves. All this changed, however, with the rise of a new leader—the cunning Zul’jin.

Reuniting the Amani tribes, Zul’jin fortified the ancient bastion of Zul’Aman and began striking out against the borders of Quel’Thalas. Zul’jin’s raids were as unexpected as they were terrible, and soon, all the High Elves came to fear the very sound of the vicious Troll’s name.

However, despite all these successes, the Amani forces could never go too deep into the Elven lands, for they were blocked by a magical barrier that encircled nearly all of Quel’Thalas. Zul’jin refused to let this barrier stop him, however, and he began capturing Elvish Rangers in an attempt to learn how to circumvent the shield.

Despite all his efforts, however, Zul’jin never managed to get through the barrier. Everything seemed lost—but then, help arrived in the form of Orgrim Doomhammer and the orcish Horde.

Seeking to sever the connection between the Humans and their Elven allies, the Horde allied with Zul’jin and together, they launched an attack against Quel’Thalas. Getting past the barrier, the Orcs and Trolls smashed through battalion after battalion of Elves.

Zul’jin and his new allies were on the verge of triumph—but then, the armies of Lordaeron arrived. Under the command of Anduin Lothar, the Humans joined the Elves, and together, they drove back the Horde’s offensive. Zul’jin and the Amani regrouped and prepared to strike again, but Orgrim and his Orcs had a different plan. Deserting the Trolls, the rest of the Horde moved south to attack Lordaeron, which had been left unguarded by Lothar’s advance.

Feeling betrayed by the Horde, Zul’jin and the rest of the Trolls attacked the Elves one last time, but without the help of the Orcs, they were easily defeated. Captured by the High Elves, Zul’jin was tortured to the point of death, but shortly before he was to be sent back to Silvermoon for execution, the Amani leader was rescued during a daring raid by his closest friends.

Returning to Zul’Aman, Zul’jin bided his time, waiting for his chance to strike back at his hated enemies. This chance arrived in the wake of the Scourge invasion of Quel’Thalas, as the Elvish defenses had been destroyed in the brutal attack. Mustering up his forces, Zul’jin prepared to destroy the newly-christened ‘Blood Elves’ once and for all.

Shortly before he was about to launch his final assault, however, the leaders of the Horde and Alliance learned of Zul’jin’s presence and sent 25 of their bravest adventurers to battle the Troll. Zul’jin battled the adventurers with all his might, but it was too no avail, and in the end, he fell before their combined strength.

This wasn’t the end for Zul’jin, however, as he has now found his way to the Nexus, where he plans to get his revenge on all who betrayed him. 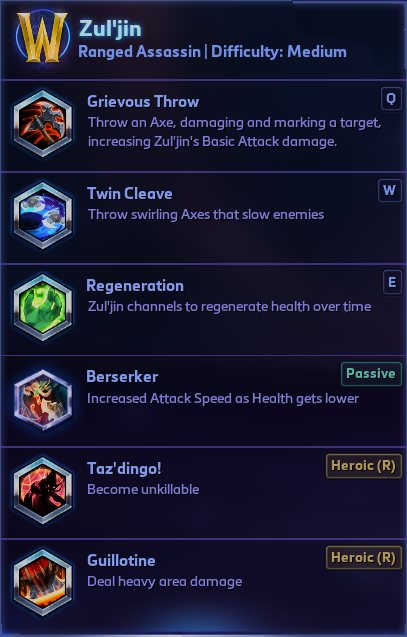 Zul’jin’s first ability is Grievous Throw. Zul’jin throws an axe forward, dealing light damage to the first two enemies hit and marking them for 8 seconds. Marked enemies take 50% extra damage from Zul’jin’s next 3 auto-attacks against them, which is very powerful, considering Zul’jin’s focus on auto-attacks.

Twin Cleave is Zul’jin’s second basic ability. Zul’jin throws 2 axes in a circle, dealing light damage to all enemies hit and slowing them by 15% per axe they get hit by. This ability is Zul’jin’s main source of poke damage, as well as being the only source of crowd control the hero has (unless he takes a special talent at level 20).

Zul’jin’s third and final basic ability is Regeneration. Zul’jin restores 25% of his maximum health over 4 seconds. This is Zul’jin’s only method of self-sustain (again, unless you take a specific level 20 talent), so it’s important to get it off whenever possible. In addition, Regeneration is canceled whenever Zul’jin moves or takes any damage, so you’ll want to be in a safe place when you use it.

Zul’jin’s first ultimate is Taz’dingo! Zul’jin becomes Unkillable for 4 seconds, which prevents him from being reduced to less than 1 Health. During Taz’dingo, Zul’jin is a death machine—however, he can be crowd-controlled during this ult, so he’ll need to be careful when using it.

Zul’jin’s second ultimate is Guillotine, which hurls a giant axe into the air. The axe lands after a short delay, dealing massive damage to all enemies hit. This damage is massively increased the lower Zul’jin’s health is, making the ability the ultimate Risk-Reward play.

Finally, Zul’jin’s trait is Berserker. Zul’jin’s attack speed is increased by 1% for every 1% of health he’s missing. In addition, Zul’jin’s trait can be activated to increase his attack damage by 25%, at the cost of 2% of his maximum health per attack. As Zul’jin is an auto-attack focused hero, gaining the bonus damage from Berserker is insane—however, if his health drops low enough, he can be quickly picked off by the enemy team.

Zul’jin is a powerful ranged assassin who is all about Risk vs. Reward. When Berserker is active, his damage and attack speed goes up—but he becomes much easier to kill, do to his rapidly decreasing health pool. As a result, Zul’jin is a very difficult hero to play, but if played correctly, he becomes unstoppable.

Zul’jin’s main focus is on killing enemy heroes and taking care of boss-type objectives, such as the Immortals on Battlefield of Eternity and the Grave Golems in the Haunted Mines. On the other hand, he’s weak against minion-based objectives, as he doesn’t have any good forms of wave clear (outside of Twin Cleave, which is difficult to use).

Zul’jin’s talent tree isn’t as well defined as some heroes—however, there are two builds that stand out. The first is the Grievous Throw build. By taking talents such as Boneslicer (Grievous Throw’s hits all enemies in its path and increases their damage take even further), Vicious Assault (increases the number of times Grievous Throw empowers Zul’jin’s attacks and causes auto-attacks to reduce the ability’s cooldown) and Eye of Zul’jin (successful Grievous Throw increase Zul’jin’s movement speed). All of these talents greatly increase the power of Grievous Throw, while also buffing the hero’s main source of damage: his auto-attacks. As a result, this build is by far the most popular one—however, there is a second build that is quite interesting as well: the Twin Cleave build.

Focusing entirely around the Twin Cleave ability (obviously), this build completely changes the way the hero is played. With talents such as Arcanite Axes (which reduces the ability’s cooldown for every hero hit, as well as increasing your Ability Power by 25% at low health) and Wrong Place Wrong Time (Twin Cleave does extra damage to enemies that get hit by both axes simultaneously), Zul’jin becomes surprisingly effective at dealing damage from long range. Top all this off with Guillotine, and suddenly Zul’jin’s Spell Damage build becomes surprisingly powerful.

Because of his high sustain damage, Zul’jin is very strong against tanks such as ETC and Dehaka, as he can quickly chew through their high health pools. He’s also very strong against Melee Assassins such as Greymane, as once he gets low, he just pops Taz’dingo and they can no longer kill him.

On the other hand, Zul’jin’s main weakness is crowd control. If he gets blinded, he loses all his damage output, and if he’s stunned, rooted or slowed, he dies incredibly easily. As a result, Zul’jin is very weak against characters such as Li Li, Johanna, and Illidan, who can avoid the troll’s attacks through Blinds or Elusiveness.

Overall, however, Zul’jin is a very powerful—if a bit dangerous—character. His damage is higher than nearly any other hero in the game, and his ability to become Unkillable gives him a huge edge in many fights. As a result, I definitely suggest that you learn to play the character so he may carry you to victory on the battlefields of the Nexus.