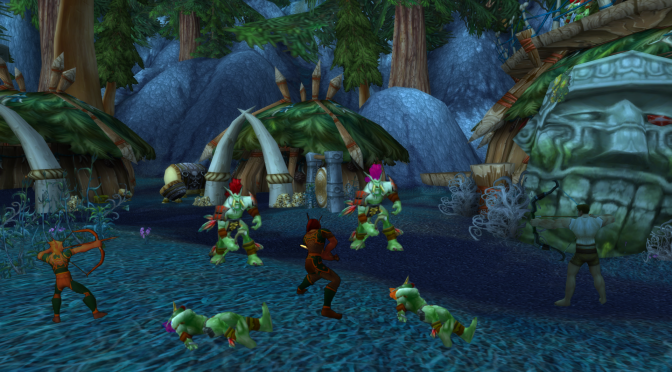 Falling back into the woods a little bit, the three companions crept around the outskirts of the camp. Thanks to their training, the elves’ movements were completely silent, but it came as a shock to both of them when Nathanos matched them in his aptitude for stealth.

The human passed through the thickest undergrowth without making the slightest sound, and at one point, he even passed within five feet of an Amani sentry without alerting the troll to his presence. “Impressive woodsmanship,” Caladthras quietly remarked once the three had reached their destination, “Where did you learn to move like that?”

“When I was young, I lived on a small homestead on the edge of a large forest,” Nathanos replied. “Every day, I’d go out into the woods to play, and over time, I became attuned to the intricacies of the woods and the creatures that lay within. Eventually, I realized that I was more comfortable in the forest than around civilization, so I left my home and have been living off the land ever since.”

“If that’s so,” Caladthras asked, curious about his new companion’s history, “Then how did you get captured by the Amani?”

“I got reckless,” the human admitted, “I heard about a giant dragonhawk that lived up in the abandoned fortress above Tor’Watha, and I decided to try and tame it. Traveling up through the Thalassian Pass, I got careless and was ambushed by an Amani raiding party. I got one or two of them, but then they knocked me out, and next thing I know, I’m here.”

“Well, this is all very interesting,” Daelenar broke in, “But can we share our life stories later? We have a village to save.” Nodding in agreement, the other two quieted down and nocked an arrow to their bows. “Okay, on three,” the red-haired Ranger whispered, “Three…two…one…now!”

Leaping out from cover, Caladthras and Nathanos let loose a pair of quick shots, instantly downing two of the Amani guards. Crying out in confusion, the remaining sentries spun around—just in time to see Daelenar charge from the forest’s edge, swords at the ready. “Anar’alah belore!” the Ranger yelled, plunging his blades deep into the nearest troll’s chest.

Kicking the mortally wounded guard aside, Daelenar spun around, decapitating three more trolls in a single blow. “Who’s next?” the high elf exclaimed as the now-headless bodies fell to the ground. There was no answer to this question, however, as all the remaining guards had joined their allies on the ground, slain by the sure aim of Caladthras and Nathanos.

Nodding in sober approval, the red-haired Ranger walked over to the nearest cage and smashed it open with a single blow from his sword. “You’re free,” he declared to the startled elven captives, “Head for Farstrider Retreat—you’ll be safe there.” Nodding mutely, the former prisoners scampered out of the cage and ran off into the forest.

By this point the entirety of Tor’Watha had been alerted to the rescue attempt, and the Amani raiders had begun to assemble. “Caladthras, Nathanos, open the rest of the cages!” Daelenar commanded, slicing through the rope holding the nearest prison shut. “We need to get the prisoners away before the trolls can organize!”

Nodding, the two archers ran over from their cover in the woods and went to work on the remaining cages. It was quick work, and within a couple minutes, nearly all the elven captives had been freed. There were only one or two cages left to open—but then, the trolls attacked.

“Incoming!” Caladthras yelled, nocking and firing an arrow as he did, “Watch out!”

Spinning around, Daelenar spotted the charging trolls, and a sharp curse escaped his lips. “Nathanos!” he barked, thinking quickly, “Get the rest of these cages open. Caladthras, cover me—I’m going in.” With a fearsome battle cry, Daelenar drew his twin swords and leapt into the fray.

With a vicious blow, the Ranger sliced deep into the nearest troll’s chest. Crying out in dying anguish, the Amani toppled backward, pushing the rest of the raiding party back. Taking full advantage of this moment of disarray, Daelenar swung both blades forward in a wide arc. There was a series of loud crunches, and then the entire front line of trolls collapsed to the ground. A second later, they were joined by their newly severed heads.

Smiling at the havoc he’d wrought, Daelenar charged forward into the Amani once more. Holding both blades straight out from his body, the Ranger tore through his enemies in a whirlwind of blood and steel. Flesh tore, bones shattered, and troll after troll fell before the vicious elven onslaught.

Freeing the last of the captives, Nathanos and Caladthras leapt up on top of the now empty cages and fired a withering volley into the remaining trolls. Seven of the Amani warriors were instantly killed by this powerful barrage, toppling to the ground without so much as a single cry of pain.

Between the vicious blows of Daelenar and the expert marksmanship of the archers, the rest of the trolls were quickly brought down. Taking a second to catch his breath, Daelenar turned to the others and said, “Well, that wasn’t exactly how I planned it, but good job. Now, we just have to get Linaeum, and…”

“So, ya be lookin’ for ya friend, eh,” a dark, sinister voice hissed. Jumping in surprise, the three heroes spun to face the chieftain’s hut, where they beheld a large, shadowy figure standing just inside the front door. “Good ting I know jus’ where he be.” The speaker stepped into the light, and the companions let out a collective gasp as they beheld a massive troll holding a barely conscious Linaeum by his neck.

“Put my brother down, you monster!” Caladthras roared, raising his bow and aiming at the giant troll. “Or I’ll shoot you where you stand!” The young elf expected his foe to be cowed by this threat, but instead, the mighty Amani just laughed.

“You be threatenin’ me wid dat little ting?” he asked incredulously. “Dat bow couldn’t pierce da hide o’ a human—how ya be tinkin’ it kill Vul’garak, da mightiest Amani chieftain north o’ Zul’Aman. Besides,” the gigantic troll continued, “I have your friend by da neck—if ya make even one move against me, I’ll squeeze my hand, and he’ll be dead.”

Realizing it was no use, Caladthras and Nathanos slowly lowered their bows. “Now,” Daelenar called, sheathing his swords, “Give us back our friend, and we’ll leave in peace.”

For a moment, the troll considered the offer, but then he shook his head in disagreement. “I don’t tink so, mon,” the Amani chieftain declared, “I tink ya all gonna be dyin’ now.” And with a single swift movement, he snatched a dagger from his waist and plunged it into Linaeum’s chest.