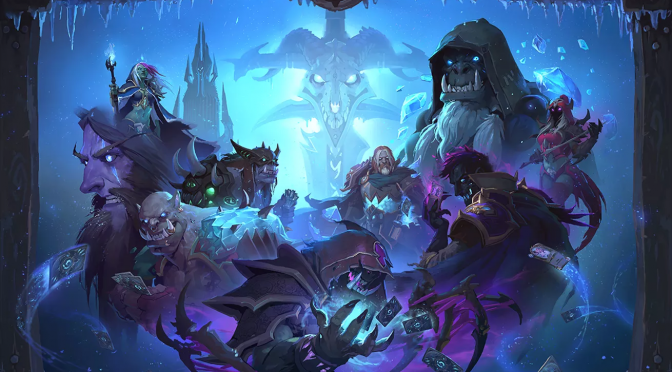 The Knights of the Frozen Throne expansion is here, and I’ve already started work on new decks. So far, I’ve tried out several different decks and archetypes, to varying degrees of success. These are the decks I’ve created so far, as well as my thoughts on how they performed.

Originally, I was planning to start with a Paladin deck of some kind, but then I opened both Moorabi and Thrall, Deathseer in my first few packs, I decided that I had no choice but to build a Freeze Shaman deck. Tossing in all the new Freeze cards (along with some older ones), I tried to see if the deck would work out.

At first, things went pretty well—a lot of the decks I was matched up against were Midrange, minion-based archetypes (such as Paladin and Enrage Warrior), and I easily defeated them. Things were looking great…but then I started running into the spell-centric control decks (like Freeze Mage), and things started to go downhill.

Unlike most Shaman decks, Freeze Shaman has no way to put pressure on the enemy hero outside of Bloodlust or the new Snowfury Giant. This means that, while they can eventually chip down most Midrange or Aggressive decks, Freeze Shaman has a lot of trouble against any kind of Control deck, which is what 90% of players appear to be running at the moment.

As a result, Freeze Shaman is an unpredictable deck to play at the moment. Once the meta settles, it could actually be worth playing, but for now, it’s best left to the casuals.

The Upsides: Very strong against Aggressive and Midrange decks, as it can stall and clear enemy boards for a very long time.

The Downsides: Very weak against Control decks, as it has no way to threaten lethal.

The Interesting: In one game against a Death Knight Paladin, I stole his Tirion twice with Moorabi before turning it into a Frog. I won the game a couple turns later.

Back in Journey to Un’Goro, I attempted to make a Discard Warlock—but it failed, miserably. With Knights of the Frozen Throne, however, I decided to give the archetype another go (a decision that was perhaps influenced a bit by the fact that I pulled Blood Queen Lana’thel from one of my preorder packs), and it actually worked out pretty well.

Discard Warlock has always had some trouble clearing enemy minions, but thanks to the presence of new cards like Defile and the Despicable Dreadlord, I found it a lot easier to maintain control of the board. As for Blood Queen Lana’thel, she turned out to be surprisingly good in any matchup against Aggressive or Midrange decks, as she almost always healed my hero for 6-10 health before getting killed.

Unfortunately, Discard Warlock is still pretty bad against Control decks, but even these matches are winnable thanks to the endless value of Lord Jaraxxus and the Nether Portal. As a result, the deck actually did pretty well overall, and helped me to climb several steps up the ladder.

The Upsides: Very strong against Aggressive and Midrange decks, as it has several strong Taunt minions and some powerful healing in the midgame.

The Downsides: Somewhat weak against Control Decks. In addition, if you get unlucky with Discards, the deck will suddenly become laughably bad.

The Interesting: In one game against a Rogue, I was at 4 health, but then the Rogue used Betrayal on my 7-attack Blood Queen Lana’thel. Lana’thel proceeded to kill off two of my weaker minions and healing me for 14, which put me out of range of the Rogue’s attacks.

After playing a game where I discarded my Lord Jaraxxus, Blood Queen Lana’thel and both of my Despicable Dreadlords in a single turn, I was feeling pretty angry, so I decided to go play Enrage Warrior. Sadly, I had not opened the new Warrior Hero, Scourgelord Garrosh, but I had collected Rotface (the new Warrior Legendary) and most of the new Enrage-synergy cards, so it wasn’t long before I had made a complete deck.

Thrilled with my new creation, I headed into ranked—and things did not go well. My early game minions were often too weak to contest the board against my foe’s plays, so I was never able to get a large enough board to take advantage of powerful Midrange minions like the Dark Revenant. Then, in the late-game, I attempted to use Rotface to gain tempo, but in most cases, he failed to really accomplish anything.

It should be noted, however, that I do not own either Scourgelord Garrosh or the Classic Legendary Grommash Hellscream. As a result, I ran out of plays in the late-game, a situation that could have been rectified by either of these minions. As a result, I don’t want to completely write the deck off—but I will say that if you want to play the deck, you’ll need to be prepared to spend some dust.

The Upsides: Can occasionally beat other Midrange deck. I wouldn’t count on it though.

The Downsides: Loses to pretty much everything.

The Interesting: If you’re somewhat lucky, Rotface can have some very interesting results. For example, there were a few games where I ended up with four or five powerful Legendary minions on the board.

First introduced in Mean Streets of Gadgetzan, the Handbuff Paladin Archetype focuses on using cards such as the Grimestreet Enforcer and Smuggling Run to increase the power of its hand. Back in Mean Streets, the archetype was absolute garbage, and any Paladins who attempted to make it work were quickly driven out of town in defeat.

In Un’Goro, the archetype had a couple bright moments, but it was too weak against Aggressive decks such as the omnipresent Pirate Warrior to actually accomplish a whole lot. With the arrival of Knights of the Frozen Throne, however, the meta has—at least temporarily—slowed down quite a bit, which gives Handbuff Paladin a chance to thrive.

Using the classic Handbuff cards mentioned above, along with new cards such as Bolvar, Fireblood and Uther of the Ebon Blade, I brought the deck into standard—and actually had a surprising amount of success. Thanks to the increased power of minions affected by the Handbuffs, the deck performed very well against other Midrange decks. In addition, I also won several games against Aggro decks like Pirate Warrior, as the Lifesteal effects from cards such as the Chillblade Champion or Corpsetaker allowed me to outheal the incoming damage.

As for Control Decks, the matchups are often relatively even. Against most variants of Control, Handbuff Paladin actually performs pretty well, but it really struggles against any type of Control Priest deck, as they have too many ways to Destroy or Silence large minions.

The Upsides: Is very strong against other Midrange decks, and is slightly favored against Aggressive and Control decks.

The Downsides: Is very weak against Control Priest, which is seeing a bit of play in the meta right now.

The Interesting: Prince Keleseth (the 2-mana Legendary who gives all the other minions in your deck +1/+1 if you don’t have any other 2-cost cards) is surprisingly good in this deck. This is because the deck doesn’t normally run any 2-mana cards, so Keleseth can always get his Battlecry off.

As noted above, my first attempt to create a viable Shaman deck failed pretty badly. Freeze Shaman, while a fun enough deck to play, just isn’t strong enough in the current meta to overcome everything that is stacked against it. Freeze Shaman isn’t the only Shaman archetype to come out of Knights of the Frozen Throne, however, which is why I turned my attention to Evolve Shaman.

Starting with the new Shaman Hero Card (Thrall, Deathseer) I added as many Evolution synergy cards as I could, such as the Dopplegangster from Mean Streets of Gadgetzan and the Saronite Chain Gang from Knights of the Frozen Throne. Finally, I added a pair of Bloodlusts (for the finishing burst), and I headed into Standard to see how it would go.

I started playing around rank 15, and after playing ten or more games, I was still at rank 15. This was due to the fact that Evolve Shaman—while a lot of fun to play if it works out correctly—is incredibly inconsistent. In several of the games I played, I didn’t draw into any of my Evolution cards, and even when I did, I often struggled to develop a board that could be Evolved. As a result, I ended up losing just over half of the games I played, which means that ultimately, the deck was unsuccessful.

It should be noted, however, that a large part of my strugglers were due to terrible draws or bad Evolves. In the games where these random effects actually worked out correctly, I had a lot more success (and a lot of fun). Because of these factors, I wouldn’t completely discount this deck yet, but I also wouldn’t recommend playing it if you solely are interested in climbing the ladder.

The Upsides: Can be very strong if the draws work out, and if you pull off a monster Evolve it’s one of the coolest things in the game.

The Downsides: If the draws or Evolves don’t work out, the deck is incredibly weak, and will lose to nearly everything.

The Interesting: I created all kinds of crazy minions with the evolution effects, and ultimately had a lot of fun.

These are the main decks I’ve been playing so far. Most of them aren’t particularly good, but despite that, they’ve all been a lot of fun to play. As a result, I’d highly recommend you play as much Hearthstone as you can in the next week or so, because this is one of the most fun opening week metas I’ve ever played in!