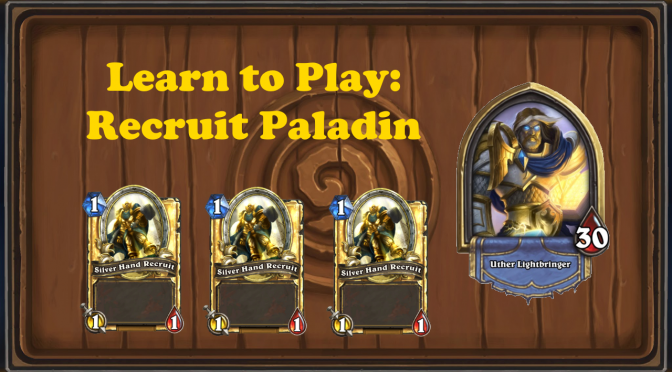 Learn to Play is a series that introduces readers to popular Constructed Decks in Hearthstone. This week, we’re going to be talking about the Recruit Paladin deck, one of the most powerful Paladin decks in the Wild Format (and the deck I used to get to Wild Legend in the May 2017 season).

Recruit Paladin is a Midrange Paladin deck that focuses around summoning and empowering Silver Hand Recruits. The deck generates a board by using cards such as Muster for Battle, Lost in the Jungle and Stand Against Darkness to flood the board with Recruits, while also including the new Vinecleaver to help stagger Recruits through several turns.

To empower the Silver Hand Recruits summoned from these cards (and the Paladin’s hero power), the deck includes two copies of Quartermaster, Steward of Darkshire and the new Lightfused Stegodon. Finally, the deck also runs the new Paladin Legendary, Sunkeeper Tarim, who allows your Silver Hand Recruits to trade into minions that are normally much larger.

Despite being based around the core focus of summoning and empowering Silver Hand Recruits, this deck also has a lot of powerful minions to help gain tempo against other midrange decks. These cards include Zombie Chow, Shielded Minibot, and Truesilver Champion, which allow you to make efficient trades against enemy minions.

This version of Recruit Paladin runs two copies of Stonehill Defender to generate extra defenses against aggressive decks such as Pirate Warrior. Stonehill Defender is also good for granting late-game value against control decks in the form of extra copies of Tirion Fordring and Sunkeeper Tarim.

In addition to these midrange tools, this deck runs Consecration and Equality to help deal with other aggressive and midrange decks. It also runs Loatheb to prevent potentially lethal damage near the end of the game, and Ragnaros, Lightlord to heal your hero back up. Finally, the deck runs Tirion Fordring and two copies of Spikeridged Steed, which give the deck survivability and a late-game threat.

Depending on the class and archetype you’re facing, the cards you’ll want to keep will change. Against Pirate Warrior, Face Hunter, Aggro Shaman and Egg Druid, you’ll want to look for a copy of Zombie Chow or Lost in the Jungle, a copy of Shielded Minibot, and a copy of Muster for Battle. Stonehill Defender is also an acceptable option against Aggro Shaman and Face Hunter, but it’s very weak against Pirate Warrior and Egg Druid, who run minions that are unaffected by the Stonehill Defender’s one attack.

Against control decks like Reno Warlock and Reno Mage, you’ll want to get rid of Zombie Chow—as you don’t want a card that heals your opponent—as long as you already have at least one copy of Lost in the Jungle. Otherwise, you should keep the Zombie Chow, as it’s still a decent turn one play. In addition, Shielded Minibot and Muster for Battle are quite good in this matchup.

Against Paladins, you’ll want Zombie Chow or Shielded Minibot, Muster for Battle, and one copy of Consecration (to counter the Paladin’s Muster for Battle). Stonehill Defender is also very good in this matchup, as its one attack doesn’t matter against Silver Hand Recruits, who only have one health.

In the early part of the game, your main goal will greatly depend on the deck you’re facing. Against aggressive decks, your main goal will be to defend the board by trading your minions efficiently into the smaller minions of your opponent. This is especially important against Pirate Warrior and Egg Druid, as their minions can get out of control if they are allowed to live.

Against control and midrange decks, your goal is to gain tempo by getting minions onto the board. Lost in the Jungle, Shielded Minibot and Muster for Battle are especially good at getting control of the board. You’ll want to avoid committing too many resources to the board, as in the beginning of the game, your Silver Hand Recruits are only 1/1s, which makes them very vulnerable to a lot of board clears (especially Maelstrom Portal, a powerful 2-mana board clear that is almost always in a Shaman’s starting hand).

On turn 5, if any of the Silver Hand Recruits buffed by the Lightfused Stegodon or Steward are still alive, you can use the Quartermaster to increase their power. The big issue here, however, is to ensure that you don’t overcommit to the board. If you use too many of your Silver Hand Recruit generators—only to have all the minions destroyed by a board clear—you’re going to lose.

As the game goes on, there will be more and more opportunities for you to combine your Silver Hand Recruit generators and buff cards. On turn eight, Steward of Darkshire can be combined with Stand Against Darkness (to create a 3/3 and five 1/1s with Divine Shield) and on turn nine, you can play Quartermaster and a Lightfused Stegodon to empower the Silver Hand Recruits.

At this point, your late game cards—Ragnaros, Lightlord and Tirion Fordring—will come into play, which will grant you a lot of power on the board. Again, you have to be careful not to commit too many of your late-game threats at any time, or else a single powerful board clear could get rid of everything you have.

On every turn, you’ll need to be looking for a potential chance at killing your opponent, as the damage increases allowed by Lightfused Stegodon’s Windfury and +3 attack Adaptations—or even just the +2 attack granted by the Quartermaster—can often allow for surprisingly fast kills.

Finally, you’ll want to be aware of your opponent’s win condition, and plan accordingly. If you’re playing against an aggressive deck, all you have to do is prevent them from dealing too much damage to your hero with the help of Taunt minions. If you’re playing against a control deck that relies on bursts of damage to win, you’ll want to save your only source of healing (Ragnaros, Lightlord) until they’ve played their Alexstrasza or done a lot of damage to you with burn spells or minions.

Overall, Recruit Paladin is a very powerful deck. Despite having no card draw tools, the deck is surprisingly consistent because of the Paladin hero power, which generates a Silver Hand Recruit every turn (minions that can then be buffed by all the Silver Hand Recruit synergies in the deck).

Recruit Paladin is very strong against control and midrange decks, and while it can struggle against some aggressive decks (especially Pirate Warrior and Egg Druid), the Paladin can win these matches as long as it draws well. As a result, the deck is a lot of fun to play, and I’d greatly recommend testing it out if you enjoy playing in the Wild Format.

Despite being a token deck, Recruit Paladin contains some very expensive cards to craft. Fortunately, only a couple of these are essential to the deck, and most of them can be replaced with other cards:

Tirion Fordring—This Legendary minion is very powerful, but he doesn’t actually have any synergies with the deck, so he can easily be replaced by either a big minion such as Volcanosaur or a card that does synergize with the deck, such as a second Vinecleaver.

Ragnaros, Lightlord—This Legendary minion provides a large heal, which is necessary against decks such as Freeze Mage, in addition to being a powerful force on board. If you don’t own the card, however, you can duplicate the healing effect with an Antique Healbot, which doesn’t have the large body of Ragnaros but it’s a bit cheaper both to craft and to play.

Sunkeeper Tarim—This Legendary minion has a lot of synergy with the deck, but it is very expensive to craft, so it’s possible you won’t have him. In that case, the best plan is to run a card that has a similar effect, such as the Warhorse Trainer.

Loatheb—This Legendary minion is useful for denying enemy spells, but it isn’t required, so in most cases another midrange minion such as the Piloted Shredder or Azure Drake are just as good in this slot.

Quartermaster—The only Epic card in the deck, the Quartermaster is the foundation for much of Recruit Paladin’s Power. If you don’t have a copy of it, however, a board-buffing minion such as Warhorse Trainer or Mukla’s Champion can work as a replacement.