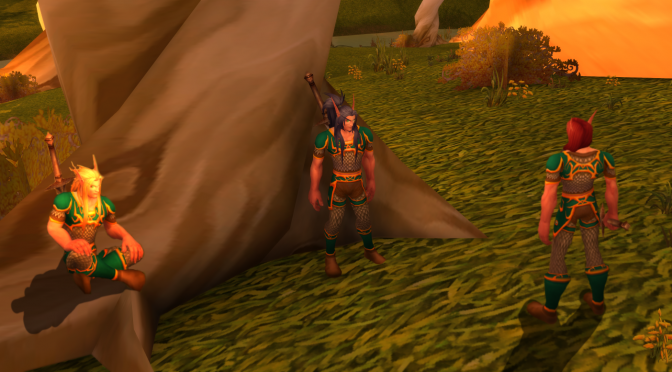 The golden sunlight softly streamed through the trees of Eversong Woods, bathing the leaves with the invigorating rays. Rejoicing in the wondrous light, the forest’s songbirds joined in a beautiful song, the notes of which echoed for miles around. Everyone who heard the dulcet tones, no matter if the hearer was elf or beast, took heart at the magnificent chorus…

“There is no way you’re a better archer than me!” a loud voice declared, startling all the birds into silence. “Linaeum, tell Daelenar that I’m the best archer here!” The owner of these show-stopping vocal cords was a young high elf named Caladthras, who was seated on a stump in the center of a small clearing.

“Shush, Caladthras,” Linaeum replied, attempting to silence his younger brother, “You’re scaring the birds away.” Closing his eyes, the tall, dark-haired elf listened in contentment to the distant song.

“But it’s important!” Caladthras insisted, halting the feathery chorus once more. “How am I ever going to become Ranger-General if people think I can’t shoot a bow?”

“I didn’t say you couldn’t shoot a bow,” Daelenar broke in, a smug smile adorning his face, “I just said you’re not as good as me.”

“What are you talking about?” Daelenar cried, his smug smile replaced with a look of indignation at his friend’s remark. “I’m a fine archer. Why, just yesterday I got six bulls-eyes in archery practice!”

“Yeah, out of five hundred shots!” Caladthras replied, running his long, lithe fingers through his golden hair in agitation. “No one would ever call that ‘fine archery’.”

“He’s got a point, Daelenar,” Linaeum said, joining the conversation, “Six out of five hundred? That’s almost as bad as a human would do.”

“We don’t need your opinion, Linaeum,” Daelenar snapped, “Go back to listening to birds.”

“Well, I would,” the dark-haired elf replied, “If you two hadn’t scared them all away with your inane argument! Now, if you’ll be quiet, I’ll…” Linaeum froze in mid-sentence, as his ears picked up a distant sound.

“What is it?” Caladthras asked, noticing the strange look that crossed his older brother’s face. “What do you hear?”

“It’s Suncrown Village!” Linaeum declared, leaping to his feet, “It’s under attack by the Amani!” The Amani were a tribe of Forest trolls that lurked all along the eastern edge of Quel’Thalas. Ancient enemies of the high Elves, the Amani were known for their raids, which were as brutal as they were unexpected.

“We need to get help!” Caladthras exclaimed, horrified by this terrible news. “Suncrown Village is a peaceful community—they don’t stand a chance against the Amani!” Leaping to his feet, the young elf prepared to run—but before he could, he was stopped by a firm hand on his shoulder.

“There’s no time,” Linaeum said, preventing his brother from leaving, “The closest outpost is Farstrider Enclave, and by the time we get there and back, it will be too late for Suncrown. No,” the elf insisted, grabbing his broadsword from where it was propped against a stump. “If the village is to be saved, we’ll have to do it ourselves.”

Grabbing his bow from, Daelenar leapt to his feet. “I’m with you, Linaeum,” he declared, tightening his quiver. “Suncrown needs our help!”

Nodding his thanks, Linaeum turned to Caladthras and raised an eyebrow inquisitively. “But…there are trolls,” the young elf reminded his companions, “We’re just Rangers—we’re trained to deal with unruly wildlife, not vicious trolls!” Caladthras searched his brother’s eyes for any sign of relenting, but found only grim determination. “Fine,” he muttered, snatching his short swords from the ground, “It’s not like I was using this life anyway.”

“You can say that again,” Daelenar muttered beneath his breath.

“Cut it,” Linaeum quickly interjected before things escalated. “This is no time for bickering—we have a village to save.” Waiting a second to make sure his two companions weren’t getting up to anything, the black-haired high elf took a deep breath and ran off into the woods.

“This isn’t over,” Caladthras whispered once he was sure his older brother was out of earshot, “I’ll kill so many trolls, you won’t have a choice but to congratulate me!”

“You can try,” Daelenar replied with a smirk, “But you’ll never, ever be as good as me.” Caladthras’ fists tightened in anger at this remark, but he kept himself in check…until Daelenar continued, “But don’t worry—I’ll be sure to give you a nice, safe job back in Silvermoon when I become the next Ranger-General.”

That did it. All thoughts of Suncrown Village and its plight vanished from the young elf’s mind, replaced with a blinding rage. “You take that back!” Caladthras cried, punching his tormentor in the jaw.

Not expecting a physical outburst like this, Daelenar was knocked back several steps from the force of the punch. Of the three Rangers, however, Daelenar was easily the strongest, so once the surprise wore off, it only took him a second to recover. “So, that’s how you want to do this, eh?” the red-haired elf asked, smiling grimly, “In that case, let the battle begin.”