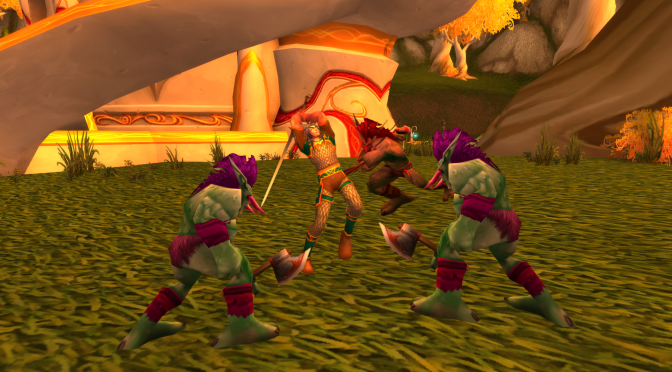 Traveling at a full run, Linaeum made good time through the forest, and five minutes later, he arrived at the outskirts of Suncrown Village. Taking cover behind the trees that bordered the small town, he peered out—and gasped in horror at what he saw.

The streets of the little village were swarming with trolls, all of whom were armed to the teeth with swords, axes and the occasional spear. The few Elves who had attempted to fight back had already fallen before the blades of the Amani, and the rest were being herded into large wooden cages. By the looks of it, the trolls were nearly done collecting their captives, so if Linaeum and his companions were to stop them, they’d need to strike now.

Turning around, Linaeum opened his mouth to tell the others his plan…and gasped upon seeing that he was alone. “Those fools,” he muttered angrily, “They must have started fighting the second I was gone! I’m alone…” A look of horror crossed the high elf’s face, but it was quickly replaced by one of determination, as he realized what he had to do.

Taking a deep breath, Linaeum charged out from his hiding place. “For Quel’Thalas!” he yelled, raising his sword aloft as he ran. “For Anasterian!”

Surprised by this sudden intrusion, the Amani hesitated for a key second, allowing the elf just enough time to lunge forward and slice his blade deep into the closest troll’s chest. Dark blood sprayed everywhere, and the raider let out a bone-chilling cry before collapsing to the ground in death.

Wrenching his sword from the fallen troll’s body, Linaeum faced the remaining Amani and got into a combat stance. “I’ll give you one chance!” he exclaimed, putting as much force as he could into the statement, “Release your captives and leave the village quietly, or share in your friend’s fate!”

For a moment, the trolls just stood there, dumbfounded that a puny elf would dare to challenge them in this manner. The shock wore off quickly, however, and with a mighty roar, they drew their weapons and charged forward.

Waiting until the charging trolls were almost upon him, Linaeum gracefully leapt to the side, completely dodging the murderous raiders. “Too slow!” he exclaimed, before swiftly driving his sword into the back of the backmost troll’s spine. “Now,” the young elf continued, wrenching his blade from the massive green corpse as it fell, “Who’s next?”

Bellowing in rage, the Amani raced toward the elf again—but this time, Linaeum charged to meet them. Ducking beneath the first troll’s axe, Linaeum severed the raider’s legs with a quick slash from his blade. Without even waiting for his crippled victim to fall, the elf spun back around and parried a couple blows that would have taken off his head.

Leaping above a low-swinging mace, Linaeum lashed out in a broad arc, decapitating a pair of trolls that were standing too close together. Returning to the ground, the elf kicked out with one leg, shattering the kneecap of an oncoming Amani.

Parrying three attacks in quick succession, Linaeum proceeded to unleash a withering series of blows upon the charging trolls. Heads were severed, blood was spilled, and Amani corpse after Amani corpse fell to the ground. Soon, a pile of bodies had built up around the high Elven Ranger, and with every troll that fell, Linaeum’s confidence increased.

“I’m doing it,” the elf whispered, cleaving a foe in twain, “I’m saving Suncrown! And I didn’t even need Caladthras or Daelenar’s help!” Smiling broadly at this thought, Linaeum prepared to smite another troll—but then, a blunt object slammed into the back of his head, and everything went black.