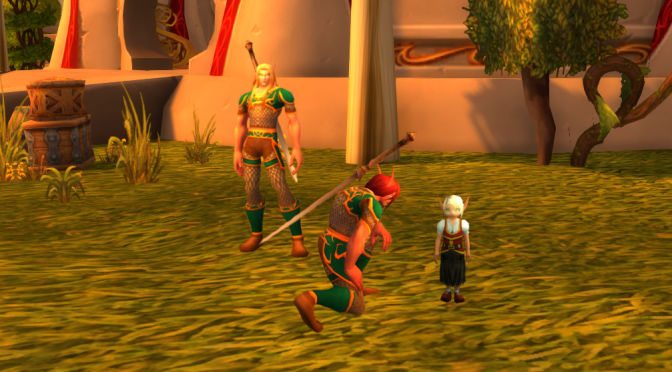 Half an hour later, Daelenar and Caladthras arrived at Suncrown Village. The trip had been an uncomfortable one, as the silent hostility between the two was considerably worsened due to the bruises and scrapes that covered their bodies thanks to their little fight. Upon arriving at the Village, however, the Elves’ silent rage was replaced by a sense of horror, as they beheld the destruction the Amani had wrought.

The streets of the village were littered with the corpses of Elves and trolls alike. Many of the buildings were charred and blackened from the fires that had ravaged the town, leaving the beautiful architecture ruined beyond repair. Sharing a look of despair, the two Rangers slowly entered the settlement, their hearts sinking as they took in the devastation.

“This…this is our fault,” Caladthras whispered, looking around in despondency. “I put my stupid pride before my sense of duty, and now my brother—and everyone else who used to live here—is dead.” A single tear rolled down the young elf’s cheek, and he lowered his head in grief.

Daelenar opened his mouth to console his distraught companion, but then, he heard a strange sound coming from nearby. Motioning for Caladthras to be silent, the muscular high elf carefully crept toward the noise, drawing his swords as he went. He didn’t know what kind of trap the Amani might have left behind, but he wasn’t going to take any chances.

Following the sound down the road a little, Daelenar turned a corner and froze upon seeing a lone Elven girl—no older than ten years old—crying over the slain body of her mother. Quickly sheathing his blades, the Ranger knelt down beside the weeping child and placed a gentle hand on the girl’s shoulder.

Spinning around the second she felt Daelenar’s hand, the young child stumbled backward, a look of sheer terror on her face. “Please, don’t eat me!” she squealed, “I don’t want to die!”

“Hush, it’s okay,” Daelenar whispered in the most soothing voice he could muster, “I’m not going to eat you. I’m here to protect you.” Upon hearing this, the girl calmed down a little, and the Ranger continued, “What’s your name?”

“Ariella,” the girl said, wiping a tear from her face.

“Green monsters attacked the village,” the child replied softly. “They killed Magister Sar’guin and his wife, and Captain Karanas, and…and…and they killed my mother!” Ariella burst into tears once more, weeping over her fallen mother.

“It’s okay,” the high elf repeated, wrapping a comforting arm around the young girl’s shoulder, “You’re safe now.” For close to a minute, the child continued to weep, but eventually, the tears dried up, and Daelenar asked, “So, what happened next?”

“The monsters took everyone and put them in cages,” Ariella said, “And they were about to take them away when the hero arrived.” The girl’s sorrow was momentarily forgotten, as she remembered the heroism she had witnessed. “There were so many monsters, but the hero charged in anyway, without any fear. He killed monster after monster with every blow—it was amazing!”

“What happened next?” Daelenar asked. If the girl’s ‘hero’ was Linaeum, then it was possible the child knew where the Ranger had gone.

“One of the monsters sneaked up on him, and hit him in the head with a hammer,” the young Elven girl replied, lowering her head slightly at the memory.

“They killed him?” Caladthras broke in. He’d come over when he heard the voices, and hearing that his brother had fallen sent a chill creeping up his spine.

“No,” Ariella shook her head. “He fell asleep, and the monsters put him in one of the cages and took him and the others away.” The two Rangers shared a look of relief at this news—if Linaeum had only been captured, then they still had a chance to get him back.

“Thank-you, Ariella,” Daelenar smiled warmly, “I just have one more question: where did the monsters take the hero?” The young girl considered this for a minute before pointing northeast, toward the nearby Lake Elrendar.

“Tor’Watha!” Caladthras exclaimed, “It’s the largest Amani settlement north of the lake, and there have been rumors that the trolls are gathering their numbers there. If the prisoners are anywhere, that’s where they’ll be.”

“In that case,” Daelenar, “We should take Ariella back to Farstrider Retreat and tell the Rangers there what’s going on. They’ll send a battalion of Farstriders to Tor’Watha, and save everyone!”

“And the hero won’t be sakerficed!” Ariella exclaimed excitedly.

“Wait, what?” Caladthras asked, startled by the young girl’s statement, “Did you say sacrificed?”

Ariella nodded. “When the monsters left, they said that they were going to sakerfice the hero as soon as they got back to their town.” Once again, Caladthras and Daelenar shared a look—however, this time it was a look of horror instead of relief. If Linaeum was going to be sacrificed that night, there was no time to get help from the Farstriders. Once again, they’d need to do this themselves.

“Ariella, do you know how to get to Tranquillien?” Daelenar asked, naming the nearest town. The girl nodded, and the Ranger continued, “Then head there and tell Dame Auriferous that Suncrown Village has been sacked by Amani trolls from Tor’Watha. We’ll try to rescue them ourselves, but help would be greatly appreciated.” Pausing for a moment, Daelenar asked, “Did you get all that?”

“Perfect,” the Ranger smiled warmly at the young girl. “Now, Caladthras,” he continued, turning to his companion, “We have a village to save.” The younger elf nodded, and together, they set off into the forest.