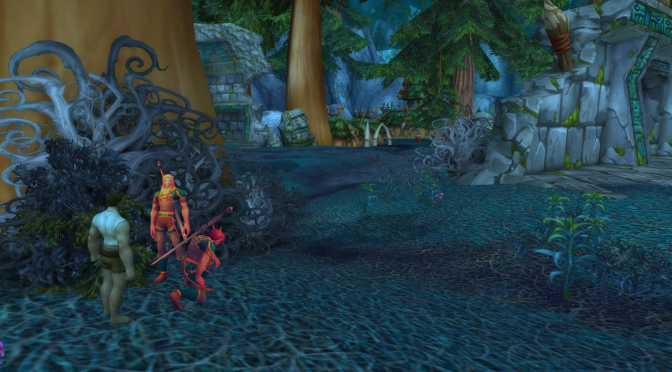 Crossing Lake Elrendar just to the southeast of Suncrown Village (where the waters were the narrowest), the two Rangers headed north, traveling through the forest at a brisk pace. Unlike on the previous trip, there was no anger between the two companions, only a firm determination to rescue their friend from his Amani captors.

Several hours later, Daelenar and Caladthras arrived at the outskirts of Tor’Watha. Once the bastion of Amani civilization in Eversong Woods, the village had been destroyed during an ancient war and had never really recovered. Only a few parts of the once massive wall encircling the village remained, and the fortress nestled into the hills above lay completely abandoned.

By this point, the sun had already begun to set on the horizon, but the light of numerous Amani campfires kept the village well illuminated.

“Daelenar, do you see him?” Caladthras asked, observing the troll settlement from his position in the upper branches of a nearby tree. “I can’t find my brother anywhere.”

“Neither can I,” the red-haired Ranger replied, scanning the occupants of each cage for any sign of their captured companion, “The trolls must have taken Linaeum away to their ceremonial hut to prepare for the sacrifice.”

“But which building is the ceremonial hut?” the younger elf quietly exclaimed, “I don’t know anything about troll architecture—they all look the same to me!” Peering down at the village below once more, Daelenar realized that Caladthras was right—all of the buildings were remarkably similar in appearance.

“In that case,” Daelenar said, “We’ll have to…” The Ranger’s voice faded off, as he suddenly spotted something he’d overlooked before. On the far side of the village, nearly hidden in the shadows of the trees, was a single cage with a lone occupant.

“Caladthras, look over there,” the older Ranger whispered, pointing at his discovery. Following this instruction, Caladthras’ jaw dropped, as he spotted what Daelenar had seen.

“It’s not Linaeum,” Daelenar replied, sensing what his young companion was about to say, “He has dark hair, but your brother is thin, and this captive is broad-shouldered and muscular. It would appear that the Amani have caught themselves a human.”

“A human?” Caladthras declared in surprise, “What’s a human doing so far north?”

“I don’t know,” the red-haired elf replied, “But judging by his bedraggled appearance and the state of his clothes, I’d say he’s been here for a while…”

“So he’ll know where the trolls took Linaeum!” Caladthras broke in excitedly. Daelenar nodded, and the younger Ranger continued, “Now, all we have to do is rescue the human, and we’ll be all set!”

Swiftly descending from their perch, the two high Elves sneaked around the outskirts of Tor’Watha. On two occasions, they were nearly discovered by Amani sentries, but the Rangers managed to silence both of them before any sort of alarm was sounded. Other than this, however, there weren’t any issues, and the companions arrived at the cage a couple minutes later.

Daelenar quickly scanned the area to ensure there weren’t any trolls watching. Seeing nothing, he slipped from the cover of the trees and sneaked over to the wooden cage. “Be quiet, and make no sudden movements,” the elf whispered in his best Common (the language of the humans), “We’re here to rescue you.”

Obeying the Ranger’s request, the human stayed completely still as Daelenar sliced through the thick rope securing the cage’s door. With a soft squeak, the door slid open, and the human silently shuffled out. “This way,” the elf said, pointed back to the woods, “We’ll be safe there.” The former captive nodded in agreement, and together, the pair retreated back into the shelter of the trees.

“So, what does he know?” Caladthras asked the moment he saw the two emerge from the tree-line, “Where’d the Amani take my brother?” The young Ranger was practically bouncing with nervous tension, which was understandable under the circumstances.

“Not so loud, Caladthras,” Daelenar whispered, raising a single finger to his lips, “We can’t let the Trolls know we’re here.” The younger elf nodded abashedly, and Daelenar continued, “Besides, our new friend here has just been freed after what was likely a long captivity. He’ll probably need a bit of time to…”

“I’ve actually only been imprisoned for about a week, but thanks for the offer,” the human said in perfect Thalassian (the language of the high elves), “And as far as your brother, I assume you’re speaking of the unconscious Farstrider that the Trolls took away as soon as the raiding party returned.”

Daelenar and Caladthras stared at the human in surprise for several seconds. The Thalassian language was one of the most advanced in the entire world—how did this human know it? This was a matter for another time, however, as there were more important things to take care of. “Where did the Amani take the prisoner?” Daelenar asked.

“Do you see that large, two-storied hut tucked into the area beneath the old fortress?” the human asked, pointing back at the village, “That’s where the village chieftain lives, and that’s where they took your friend. Now,” he continued, leaning back against a tree, “Where’s the rest of your strike force? You’ll want to get them in position so you can deal with all the guards in one fell swoop.”

“Um, there’s no strike force,” Caladthras corrected their new companion, “It’s just the two of us.” The human’s mouth dropped in shock as the elf added, “We’ve sent for reinforcements, but they’re several hours off. I doubt we have that much time before my brother is sacrificed.”

“So the two of you are going to attack an entire army of trolls, by yourselves?” the former captive asked. The two Ranger nodded, and the human let out a sigh. “In that case, count me in—after all, you’re going to need all the help you can get.”

Smiling at this declaration of allegiance, Daelenar handed the human one of his swords—only to have it rejected with a quick shake of the head. “Thanks for the offer,” the man said, “But I’m more of an archer than a swordsman. Could I have one of your bows?”

“Sure,” Caladthras agreed, “You can have Daelenar’s. He’s a terrible archer anyway.” Daelenar shot the young elf a nasty look, but then—instead of continuing the argument from before—he handed his bow and quiver over to the newly freed human, who accepted them with a  grateful nod.

“Okay, here’s the plan,” Daelenar said, drawing his broadswords, “The three of us will move together to free the prisoners. Then, I’ll use the commotion to go free Linaeum, while Caladthras and…what’s your name?”

“While Caladthras and Nathanos cover the civilians’ retreat. Any objections?” Both listeners shook their heads, and Daelenar concluded, “All right then—let’s go kill some trolls!”