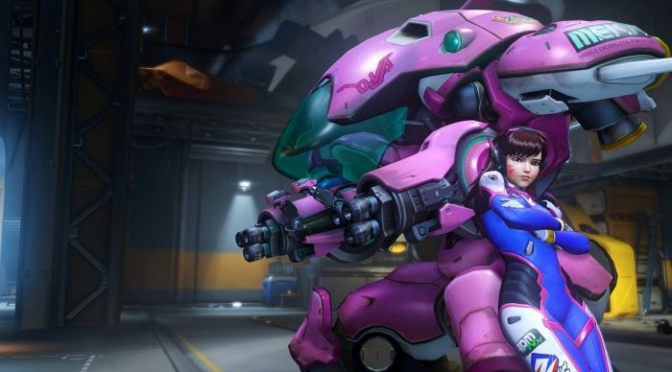 Hero Overview is a series that introduces readers to the Heroes of the Storm. This time, we’re going to be talking about D.Va, the mech-piloting warrior from the Overwatch Universe.

Twenty years ago, the nation of South Korea came under attack from a massive omnic that appeared out of the East China Sea. Its power level was unlike anything ever seen before, and it did a massive amount of damage before it was finally driven back into the water by the Korean military forces.

The Koreans knew that it was only a matter of time until the massive robot returned, so they began work on a mechanized combat drone to battle the monster. A few years later, they completed the first batch of these MEKAs, just in time to defeat the massive omnic when it returned. Once again, however, the monstrous robot was merely weakened—not destroyed—and it managed to escape back to the safety of the sea.

Every few years, the omnic resurfaced, and every few years, the MEKAs drove it back. Delighting in their triumph, the Koreans grew complacent, failing to realize that the massive robot was constantly adapting to their strategies. This miscalculation nearly proved to be disastrous, for one year when the robot emerged, it came with the ability to shut down the MEKAs’ control networks.

Their own robots rendered useless, the Koreans were forced to scramble to find another way to battle the monstrous omnic. Looking through the options, they realized the only way to save the country was to retrofit the MEKAs so they could be manually piloted. Unfortunately, on such short notice, there was no way to train new pilots, so the Korean military turned to the only people who possessed the reflexes and quick thinking required to operate the MEKAs: the country’s professional gamers.

Many of the best gamers in Korea were drafted, including the reigning StarCraft world champion, 19-year-old Hana Song. Taking the name ‘D.Va’ (after her username in the games she played), Hana was among the first MEKA pilots to engage the massive omnic. Fighting the monstrous robot with the same skill and ruthlessness that she unleashed on her competitors in StarCraft tournaments, the young professional gamer managed to drive the omnic back in record time.

Since then, D.Va has participated in several missions, performing with skill and valor in each. She has even begun streaming her combat operations to her millions of adoring fans, and has gained a global following as a result. Now, D.Va has been deployed to the Nexus, where she and her MEKA will defend any who require her aid. 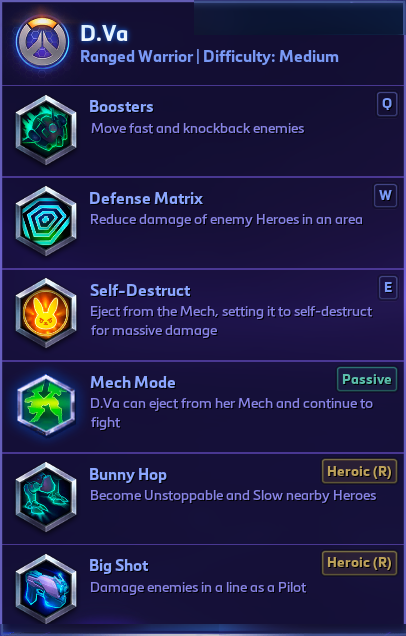 and Pilot Mode. At the beginning of a match, D.Va will be in Mech Mode, which grants her the ability to move while auto-attacking and makes her auto-attacks affect enemies in an area. When she is ‘killed’ in Mech Mode, D.Va leaps from her mech and transitions to Pilot Mode.

In Pilot Mode, D.Va’s auto-attacks do a bit more damage, but they don’t have any other special functions. In addition, D.Va loses the ability to perform most of her basic abilities, and her health pool is drastically reduced. As a result, D.Va becomes incredibly vulnerable while in Pilot Mode.

D.Va’s first basic ability is Boosters. D.Va activates her mech’s rocket boosters, which increases her movement speed by 125% for 2 seconds. Any enemies D.Va runs into while Boosters are active will take a small amount of damage and will be knocked backwards. This means that Boosters can be used as an escape, an initiation tool and a way to eliminate fleeing enemies. Boosters can only be used while you are in Mech Mode, so it is unavailable once your mech is destroyed.

D.Va’s second basic ability is Defense Matrix, which projects a small defensive field in a cone directly in front of the hero’s mech for 3 seconds. Enemy heroes standing in the defensive field deal 75% less damage, which can help to keep your allies safe in the middle of a teamfight. While Defense Matrix is active, D.Va can move, but she can’t turn the direction her mech is facing, and she can’t auto-attack. Finally, similarly to Boosters, Defense Matrix cannot be used while in Pilot Mode.

Like her trait, D.Va’s final basic ability has two parts: Self-Destruct and Call Mech. Self-Destruct—which requires the hero to be in Mech Mode—ejects D.Va from her mech and causes it to explode 4 seconds later. It deals a massive amount of damage in a large area, and is capable of killing most heroes from full health if they are standing too close to the center of the explosion. Unlike most basic abilities, Self-Destruct doesn’t have a cooldown. Instead, it gains charge based on the damage you deal and the damage you take, and it becomes available once you reach full charge.

Call Mech—which can only be used while D.Va is in Pilot Mode—allows D.Va to reenter Mech Mode (regaining the health and abilities that go along with it). By default, it has a 45 second cooldown, which starts upon exiting a destroyed mech. This cooldown is reduced by 0.5 seconds every time you auto-attack, however, so it will rarely be this long. In addition, if you enter Pilot Mode by using Self-Destruct, the cooldown on Call Mech will reset as soon as the mech detonates.

D.Va’s first ultimate, Bunny Hop, causes her mech to bounce up and down while moving for 4 seconds. During this time, D.Va is Unstoppable, and she deals a small amount of area damage and slows nearby enemies by 40% with every jump. Bunny Hop is very effective at preventing enemy retreats, but it can also be used to help D.Va escape from attackers. Unfortunately, D.Va is unable to auto-attack while this ultimate is active (and using any of her basic abilities will instantly cancel her ultimate), so the ability has to be used strategically. Finally, Bunny Hop can only be used while in Mech Mode, which makes remaining in the mech during teamfights a priority.

D.Va’s second ultimate, Big Shot, deals moderate damage to all enemies in a straight line. It only has a four second cooldown, so it can be used repeatedly, and every time it damages a hero it reduces the cooldown of Call Mech by 8 seconds. Unfortunately, Big Shot isn’t an instant cast ability (it takes about a second to fire) so enemies that are paying attention will be able to get out of the way.

D.Va is a Ranged Warrior who specializes at initiating fights and chasing down fleeing enemies. With Boosters, D.Va can dive onto her enemies’ backline heroes (such as healers and mages) to disrupt the enemy team, before activating her Defense Matrix to reduce damage taken as her own team moves in.

Because Self-Destruct takes 4 seconds to detonate, it isn’t overly effective at securing kills. In addition, the explosion does 50% reduced damage to structures, so it’s useless for sieging. On the other hand, if tossed onto an objective or capture point, it can force the enemy team away, giving D.Va’s team free access. In addition, the explosion is great at clearing mercenary waves, so you can effectively use Self-Destruct to save a fort or keep. D.Va can also use her Boosters to launch an exploding mech into the enemy team, in order to give them a little less time to escape the area.

D.Va’s first ultimate, Bunny Hop, is great for securing kills on enemies, so it’s a good choice if she has a lot of slow-but-powerful teammates. In addition, if she takes the level 20 talent (Stop and Pop), Bunny Hop suddenly becomes capable of dealing an immense amount of damage as long as the mech stays still.

On the other hand, Big Shot isn’t nearly as good at securing kills as Bunny Hop is, but it allows D.Va to quickly get her mech back by poking at enemies from a long distance away. As a result, it’s a great pick if her mech keeps dying from focused enemy fire.

D.Va synergizes very well with flankers and stealth heroes, as she can use her Boosters to knock enemies away from the safety of their walls and into the waiting arms of her teammates. She works especially well with Zeratul, as she can combine her Self-Destruct with his Void Prison to pull of some insane combo plays. In addition, D.Va always needs at least one healer on her team, as she has no way to regenerate health other than visiting a healing fountain or hearthing.

D.Va is strong against ranged auto-attack heroes, as she can use her Defense Matrix to shut their damage down. She’s also really good at jumping on enemy healers and forcing them out of the fight.

On the other hand, D.Va is weak against melee heroes, as they can get out of her Defense Matrix and take her out from the side or behind. In Pilot Mode, D.Va is vulnerable to everyone, as her tiny health pool and nonexistent mobility make her an easy target for nearly every hero.

Overall, D.Va is one of the most entertaining tanks to play, and while she is a bit trickier than most, she’s definitely worth taking the time to learn.