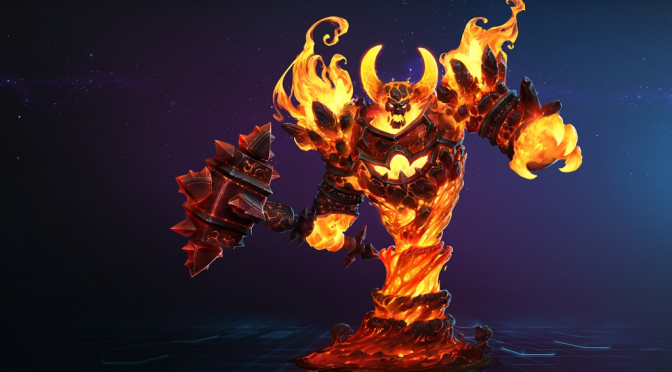 Hero Overview is a series that introduces readers to the Heroes of the Storm. This time, we’re going to be talking about Ragnaros, the Raid Boss/melee assassin from the Warcraft Universe.

Millennia ago, in the time before time, the world of Azeroth was ruled by the Elemental Lords. Neptulon ruled the water, Al’Akir presided over the air, and Therazane held dominion over the rocks and stone. The most powerful Elemental Lord of all, however, was Ragnaros the Firelord.

Wielding his massive hammer Sulfuras, Ragnaros put down anyone who dared to rise against him. Eventually, there was no one left to oppose the Firelord’s rule—but then, the Old Gods arrived. Crashing to Azeroth, the vile creatures embedded themselves deep in the planet’s crust in an attempt to corrupt the world for their own dark purposes.

Ancient cosmic travelers, the Titans hunted the Old Gods and their masters, the Void Lords, throughout the universe, intending to purge the foul creatures from existence. Upon sensing the Old Gods’ presence on Azeroth, the Titans attacked the planet and waged all-out war against the entrenched defenders.

For millennia, Ragnaros remained trapped in the Firelands (his section of the Elemental Plane)—however, this all changed during the war of the Three Hammers. Seeking an advantage over the other clans, Thaurissan (the leader of the Dark Iron Dwarves) attempted to summon a powerful fire elemental to help him turn the tide of battle. Instead, he summoned Ragnaros.

Bursting into existence in the heart of the Dark Iron’s land, the Firelord conquered the remaining dwarves and forced them to begin summoning his troops back into Azeroth. For hundreds of years, Ragnaros reigned over the Dark Iron Dwarves, but then, thanks to the intervention of 40 adventurers, the Firelord was banished back to the Elemental Plane.

This new exile only lasted a few years, however, and during the events of the Cataclysm, Ragnaros returned to Azeroth once more. Allying with Deathwing, Ragnaros and his forces attacked Mount Hyjal, burning the sacred land of the Night Elves to cinders. Once again, however, a small army of adventurers rallied to battle the Firelord, and together, they drove the Elemental Lord back to the Firelands once more.

Not content with simply forcing the Firelord to retreat, the adventurers pursued Ragnaros into the Firelands, the only place where he could actually die. There, the heroes battled the Firelord once more, and with the aid of Cenarius, Malfurion and Hamuul Runetotem, Ragnaros was defeated for the final time.

Banished forever from Azeroth, the Elemental Lord has now come to the Nexus, intending to conquer these new realms and bend them to his will. 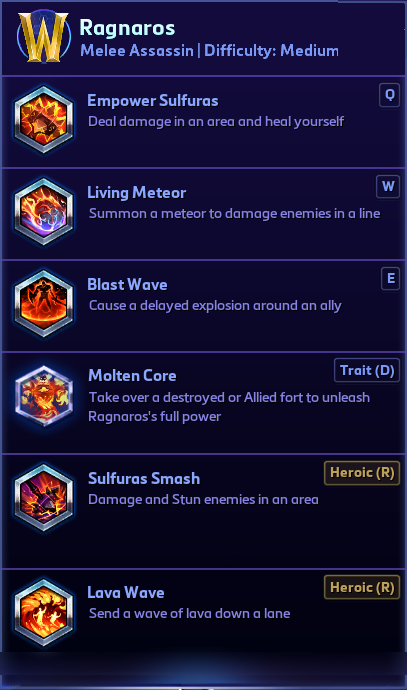 Ragnaros’s first ability is Empower Sulfuras, which causes the hero’s next auto-attack to occur instantly and deal heavy AOE damage. Ragnaros heals for 20% of the damage done from this ability, and healing is doubled against heroes. This ability excels at keeping Ragnaros alive in tough team-fights, and if the right talents are chosen, the damage it deals is astronomical.

Ragnaros’s second basic ability is Living Meteor. Ragnaros calls down a powerful meteor that deals light damage to the first target hit before rolling along the ground for 1.75 seconds, dealing constant damage to all enemies hit. This ability gives Ragnaros some ranged damage, which is very helpful for finishing off low-health enemies.

Ragnaros’s third and final basic ability is Blast Wave. This ability can be cast on either Ragnaros or any ally (including minions and mercenaries), giving the target 25% increased movement speed for 1.5 seconds. At the end of that time, the target will ignite, dealing a moderate amount of damage to all nearby enemies.

Raynor’s first ultimate is Sulfuras Smash. Ragnaros hurls Sulfuras at the target area, and after 0.75 seconds it lands, dealing moderate damage to all enemies in the area. Enemies caught directly in the center take heavy damage instead and are stunned for 0.5 seconds. This ultimate is very useful at slaying retreating foes, and when used properly, the stun can make all the difference between winning and losing a team-fight.

Ragnaros’s second ultimate is Lava Wave, which summons a massive wave of Molten Lava that surges down one lane. This wave of Lava instantly kills all minions it touches and deals massive damage to any heroes who fail to escape, which makes it perfect for defending structures that are under attack.

Finally, Ragnaros’s trait is Molten Core. With this trait, Ragnaros can seize control of a nearby allied or destroyed fort or keep, revealing his true form as an Elemental Lord. Gaining a massive amount of health and a set of brand new abilities, Ragnaros battles all nearby enemies for 18 seconds (or until his health pool is depleted), at which point he returns to his normal form. While Ragnaros is in Molten Core, the fort he has taken control of cannot be damaged, which means that this trait can be used to stall or even halt enemy pushes.

Ragnaros is a powerful Melee Assassin who deals damage through his auto-attacks and spells. Most of Ragnaros’s damage in combat comes from Empower Sulfuras and Living Meteor, but his auto-attacks do a bit of damage as well. Blast Wave is mostly used to pursue fleeing enemies or escape from a dangerous situation, but if talented correctly, it can be very useful in combat as well.

Ragnaros is also very effective in lanes, as Empower Sulfuras, Living Meteor and Blast Wave all do powerful AOE damage. In addition, Lava Wave instantly kills all minions in the lane it goes down, so Ragnaros can easily clear out a dangerous push if he needs to.

When enemies are pushing in on an allied fort, Ragnaros can use Molten Core to buy allies enough time to regroup for the defense. This ability can also be used offensively, however, as Ragnaros can take control of destroyed enemy structures to help his allies during a push.

Depending on which build Ragnaros is going for, he’ll pick a certain selection of talents. For example, if Ragnaros is aiming for an Empower Sulfuras build, he’ll take Sulfuras Hungers, which increases the ability’s damage. On the other hand, if Ragnaros is looking to increase the power of Living Meteor, he’ll take Shifting Meteor, which increases the ability’s duration and allows it to change direction while traveling. Both builds are very strong against certain teams, so the enemy team comp will often determine which build Ragnaros goes.

Thanks to his massive burst damage (from Empower Sulfuras), Ragnaros is very good at dealing with low-health characters such as Raynor and Sylvanas. He’s also quite good against Melee Assassins without massive self-healing—such as Greymane—because his large health pool and sustain will allow him to easily deal with these threats.

Ragnaros’s main weakness is high-mobility Ranged Assassins. Even with Living Meteor, Ragnaros often struggles to deal damage to these targets, and their damage output is enough to push through even his massive health pool.

Overall, however, Ragnaros is a very powerful character. His damage and health give him an edge against most other assassins, and his Molten Core allows him to single-handedly end enemy pushes. Personally, Ragnaros is my favorite character in the entire game right now, so you should definitely check him out. You won’t be disappointed.