For most of its lifespan, Hearthstone has stood in WoW’s Shadow. Its characters, settings and spells were all taken from the popular MMO while WoW ignored the card game’s existence (with the exception of a couple Easter Eggs). Over time, however, Hearthstone has grown massively popular (reaching over 50 million players, according to Blizzard) and by the time Legion rolled around, WoW had definitely taken notice.

Here are the ways Hearthstone has influenced WoW, starting with the Easter Eggs from Pandaria and WoD, and ending with the massive impact it has had on Legion. 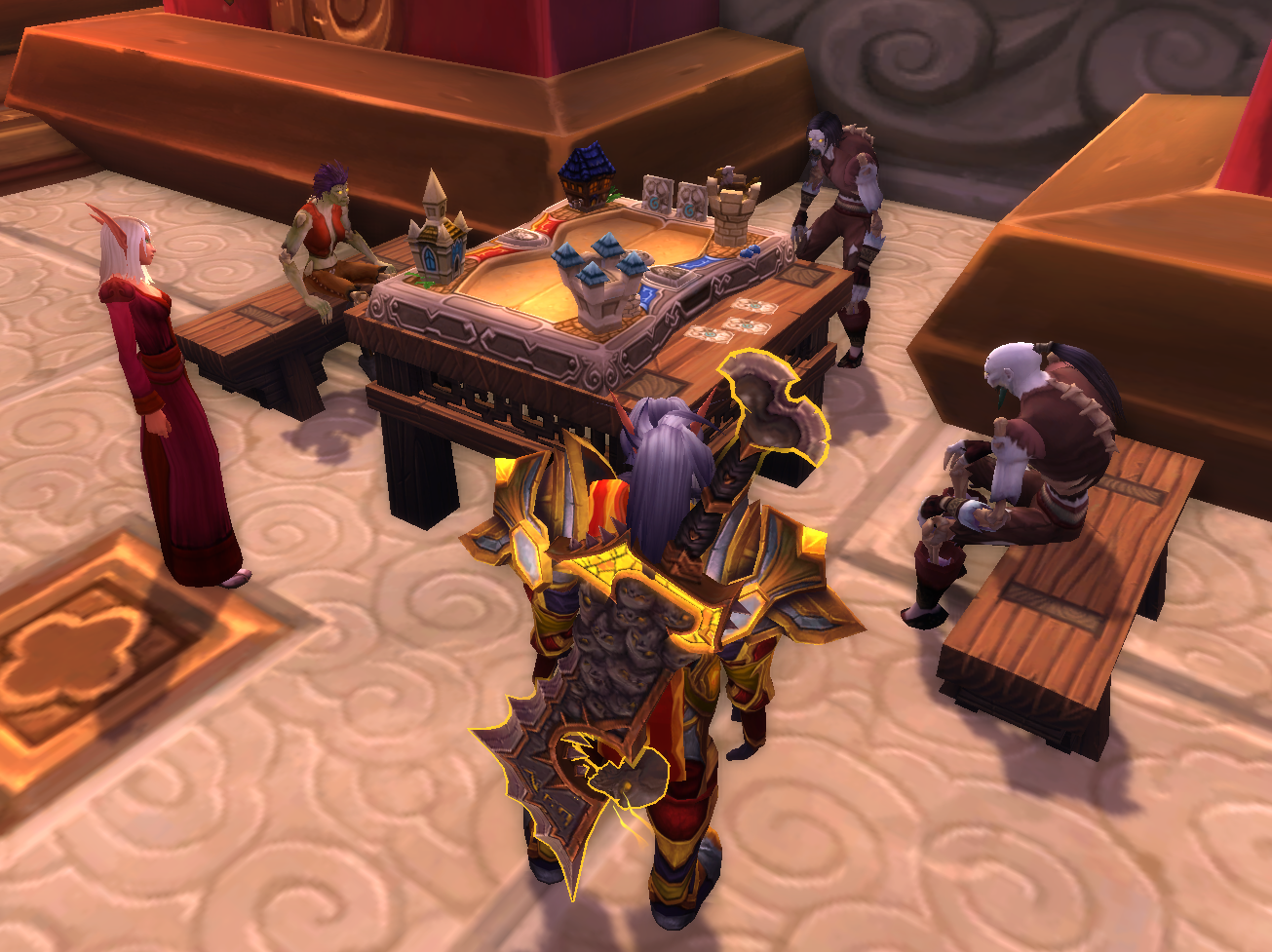 In Mists of Pandaria, if you visit the Shrine of Seven Stars or the Shrine of Two Moons in the Vale of Eternal Blossoms, you’ll find some NPC’s playing Hearthstone while other NPC’s spectate. In addition, there is a second Hearthstone table set up someone nearby that players can sit next to in order to ‘play’ the game against each other.

In WoD, you can find an NPC named Benjamin Brode wandering around your garrison. As you probably know, Ben Brode is the lead designer for Hearthstone, so if you talk to his NPC you can buy a couple Hearthstone-related toys.

In addition, there is a mission in your Garrison called ‘Hearthstone Tournament’ that you can send your followers to complete. The enemies on this mission are named after popular Hearthstone decks (such as the ‘Zoo Lock’), and if you successfully complete the mission, you’ll get a couple Hearthstone-themed toys.

Now, the Easter Eggs in Mists and Warlords were fun, but they didn’t really have a huge impact on the game. In Legion, Hearthstone takes a much bigger role, heavily impacting one of the expansion’s core elements: the Emissary Quest system.

In Legion, players receive an Emissary Quest every day, which requires them to complete World Quests for a specific faction. Once you complete an Emissary Quest, you’ll get substantial rewards from the appropriate faction, such as gold, gear and Artifact Power.

This system is virtually identical to the Quest system from Hearthstone, and since Blizzard is known for sharing good ideas between their games, there’s a good chance that’s exactly where it came from. Similarly, the Brawl mode that’s coming to WoW was inspired by Hearthstone (according to WoW Game Director Ion Hazzikostas during the Blizzcon WoW panel).

On the Easter Eggs side, the Return to Karazhan Dungeon was filled with references to the recent ‘One Night in Karazhan’ expansion for Hearthstone. These include references on item tooltips and effects, but the biggest and most noticeable Easter Eggs have to do with some mobs right after the Opera Event.

Called Back-Up Singers, these mobs are affiliated with the ‘Medivas’ faction (a nod to the Hearthstone expansion), and they cast two spells:

1: Firelands Portal, a 7-mana spell that deals 555,555 damage and summons a random creature from the Firelands Raid.

2: Purify, a 2-mana spell that dispels all negative magical effects on a friendly target and lets the caster draw a card (whatever that means).

Needless to say, these two spells are obvious references to the Hearthstone Cards Firelands Portal and Purify, and it’s really cool that these show up in the Karazhan dungeon.

Last but certainly not least, Legion marked the first time that a 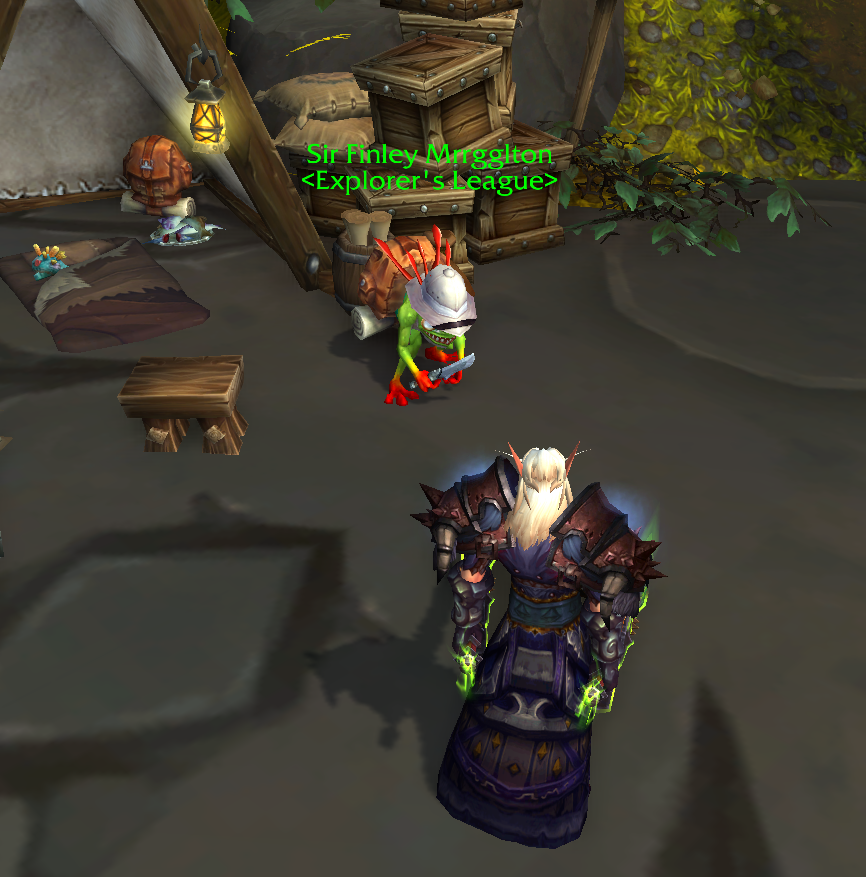 character original to Hearthstone was introduced into the World of Warcraft. This character is the famous Sir Finley Mrrgglton, explorer extraordinaire.

Found along the eastern shoreline of Stormheim (just north of Greywatch), Sir Finley has set up camp nearby the ruins of Dreyrgrot. Talk to him, and he’ll tell you that he was on his way to observe the local murlocs of Morheim when he stumbled across the ancient burial grounds of Dreyrgrot.

Being of member of the Explorer’s League, the gentleman murloc felt obliged to check the ruins out—however, before he could conduct a proper survey, a small fleet of pirates landed and broke into the main tomb, unleashing an ancient evil that lurked within.

Corrupted by the darkness lurking within Dreyrgrot, the pirates began wildly looting and pillaging the nearby area. As Sir Finley is

just a simple Murloc, there’s nothing he can do to stop this crisis, so he needs your help!

The quest series that follows has you grapple from ship-to-ship, battling a host of Blood-Crazed Pirates before entering the tomb to destroy their new leader, a powerful Vrykul Vampyr! It’s not a huge questline, but it’s a lot of fun, so any Hearthstone fans should definitely check it out!