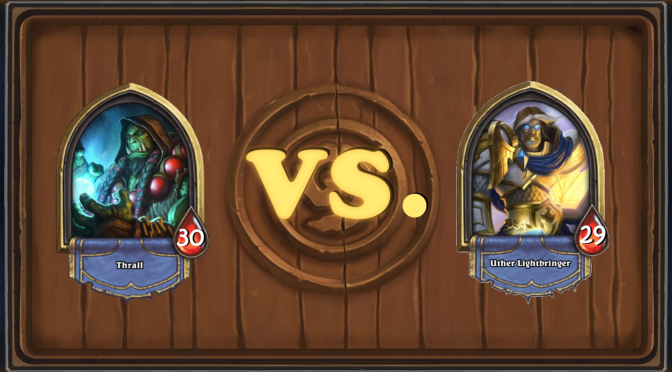 Uther stared up at the massive Flamewreathed Faceless. The creature’s tentacles swirled menacingly, thirsty for the Paladin’s blood. A faint tinge of fear slithered through the human’s veins, but he stood his ground and waved for his next ally to come out.

The Arena’s gates opened once more, and a giant woman made of ivory strode out. “Oho!” Dar’jin declared, “Uther be bringin’ out da Keeper of Uldaman. Let’s see if she can turn da tide.” 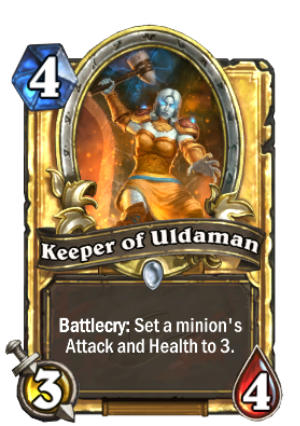 Joining the Silver Hand Recruit and the Murloc Warleader, the Keeper of Uldaman raised a giant golden hammer and yelled, “None may steal our secrets!” As she spoke, a blinding beam of golden Light shot from the hammer and slammed into the Flamewreathed Faceless. Screaming in agony, the monster hunched over, trying to protect its face from the searing pain.

“Now!” Uther yelled. Heeding its master’s call, the Murloc Warleader charged across the field and slammed his sword into the fallen creature’s exposed back. Groaning in pain, the Flamewreathed Faceless collapsed to the ground, mortally wounded.

Cheering, the Murloc raised its blade in triumph—but this celebration was cut short, as in one final act of defiance, the Flamewreathed Faceless rose up and impaled the Murloc upon a flaming tentacle. “Ouch!” Dar’jin announced, grimacing at the grotesque display, “I guess dat be what ya get for celebratin’!”

Back down on the field, Uther finished his turn by ordering the Silver Hand Recruit to destroy the already damaged Wrath of Air Totem. This done, Uther stood back and prepared himself for Thrall’s counter-attack.

Thrall’s jaw was set in anger at how easily his creature had been defeated. However, he wasn’t done yet, and with a wave of his hand he summoned a second Tuskarr Totemic into the Arena. “Did you bring some fish?” he asked Thrall curiously, and once again, the orc shook his head no. Sighing in disappointment, the Tuskarr reached into his satchel and placed an inviting yellow Healing Totem onto the sandy Arena Floor.

Sighing at the mediocre result, Thrall turned back to the first Tuskarr Totemic and commanded it to attack the enemy. “Tusk tusk!” the walrus-like creature declared before charging across the Arena floor and slapping the Paladin across the face with a loud ‘smack’, 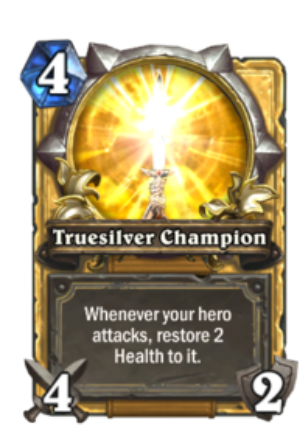 “Ouch! Dat looked painful,” Dar’jin winced at the mighty slap, “But dat be da end of Thrall’s turn. Now, what will Uther be doin’?” Narrowing his eyes, the Paladin reached into a scabbard at his waist and withdrew a massive two-handed sword. “Oho, dat be da Truesilver Champion!” Dar’jin declared, “Looks like Uther be dishin’ out da retribution himself!”

With a yell, Uther charged forward and slammed his sword into the first Tuskarr Totemic’s chest. The walrus-creature’s eyes widened in shock and it collapsed to the ground, dead. A second later, the Keeper of Uldaman charged forward as well, slaying the second Tuskarr.

Gazing down at the bodies of his fallen Totemics, Thrall felt a surge of anger run through his veins. Lightning surged around the orc’s body, and after a couple seconds he unleashed it in a mighty burst of power. Crackling electricity surged through the bodies of all Uther’s minions, slaying them all instantly. “And Thrall unleashes da power of da Lightning Storm ta annihilate all Uther’s allies. Now, back ta da Paladin.” 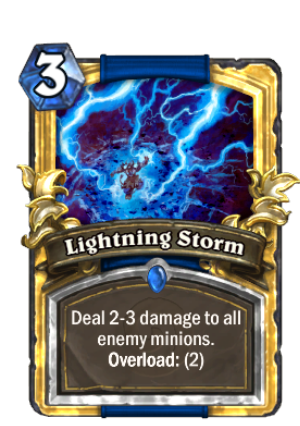 Looking down at the smoldering bodies of his allies, Uther let out a cry of rage. A second later, an answering cry boomed from the tunnel, and a large Azure Drake stepped out and took its place by the Paladin’s side. A smile crossed the Paladin’s face, and he turned back to face the orc with confidence.

Thrall isn’t cowed so easily, however, and with a mighty yell, he raises his hammer and charges. “Elements guide me!” he cries, slamming his hammer into the Azure Drake’s skull. The dragon attempts to fight back, but even its great might is not enough to stop the orc’s attacks, and the Azure Drake falls.

“Wow,” Dar’jin declared with excitement, “There be no way Uther saw dat one comin’. Now, Thrall has da advantage, and as we all know, once dis orc smells blood, he ain’t gonna be stoppin’ for anyting.”

Down on the Arena floor, Uther pondered his predicament. He needed to build up a wall of minions quickly, because if Thrall turned his hammer onto the Paladin, the fight would be over right then and there. If Uther was going to survive, he’d need an ally who could protect him—and fortunately, he knew just who to call. 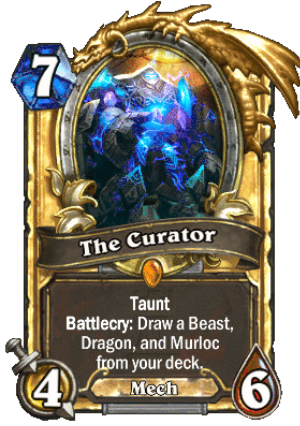 “The Menagerie is for guests only,” a mechanical voice boomed, as The Curator (a giant Arcane Guardian that used to guard the Karazhan Menagerie) strode out onto the sand of the Arena. Taking its place in front of the Paladin, the Curator set its feet and prepared to defend Uther against his orcish foe.

Across the Arena, a look of worry crossed Thrall’s face. He had no doubt he’d be able to break through the Curator eventually, but he wouldn’t get through that battle unscathed. No, there had to be a better way, and after a minute of thinking, the orc figured out exactly what he had to do…