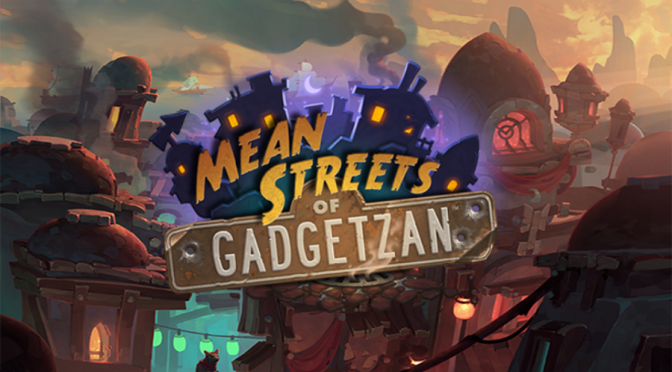 The Mean Streets of Gadgetzan expansion is here, and I’ve already started work on new decks. These three are the best I’ve come up with so far, and while they’re not quite perfect yet, they got me quite a few wins on the ladder.

Hidden in the shadowy corners of Gadgetzan, the Rogues of the Jade Lotus plot out their devious schemes. Combining the power of the Jade Golems with their natural ability for stealth, these devious scoundrels plot their attacks against the Grimy Goons and the Kabal.

The first deck I played, spurred by the

fact that I got two copies of Shaku, the Collector out of my first 30 packs opened. The idea behind the deck is to use Stealthed minions to build up a board presence, and then snowball opponents on the back of my Jade Golems.

Now, I know that I said that Jade Golem Rogue would be the worst deck to come out of the expansion, but so far, it’s actually been somewhat good. It can go toe-to-toe with Mid-Range decks, and so far, I’ve actually defeated all the Priests, Mages and Warlocks I’ve faced.

The only decks I’ve lost to have been Pirate Warrior and Aggro Shaman, and while I’ve been playing at a somewhat low rank (because of the reset), I think that it may turn out to be one of the better decks of the expansion.

The Cons: Can have trouble regaining board control against aggressive decks.

Notes: I was a bit worried that the Shadow Sensei would have trouble finding targets, but between Shaku, the Shadow Rager, the Shadow Swarmers and the Lotus Assassins, I’ve actually managed to land the buff in nearly every game.

The Gadgetzan Ferryman has also been surprisingly good, as Rogue’s advantage over other Jade Golem decks comes from its ability to bounce Golem generators back to the hand. Now, while a Youthful Brewmaster could have pulled this off as well, the Ferryman’s 3 health has made it surprisingly good during minion trades.

Dismayed by the crime that permeates Gadgetzan’s streets, Paladins from all across the world have banded together to purge the city’s evil. Striking a tentative alliance with the seemingly well-intentioned Don Hon’Cho, the Paladins begin their righteous crusade against the Jade Lotus and the Kabal.

The second deck I played, Grimy

Goons Paladin is another counter to the Jade Golem Druid decks permeating the meta. In this deck, you use the classic Paladin Board clears (such as Pyro/Equality) to deal with pesky golems, while using hand-wide buffs to make big minions of your own.

The Dopplegangster plays a big role in this deck, as being able to summon a trio of 5/5’s or 6/6’s early in the game allows you to actually out-tempo Jade Golem Druid. Another card that was surprisingly powerful was the Grimestreet Protector, as the Divine Shields it provides help tremendously with value-trading.

This deck struggles a bit against Pirate Warrior, because it doesn’t have any really good ways to counter early aggression. I think that Wickerflame Burnbristle (the Paladin Legendary) could probably help a lot in this aspect, but since I don’t own the card, I can’t say for sure.

The Pros: Incredibly powerful in the mid-game. Can out-tempo Jade Golem decks due to cheap but powerful minions (especially the Dopplegangster).

The Cons: Can have trouble regaining board control against aggressive decks.

Notes: As I mentioned above, Wickerflame Burnbristle would probably be an excellent addition to this deck. If you have him, I’d probably swap him out for Cairne, who doesn’t have any really powerful synergies in this deck (other than being a good, solid minion).

When playing against a Mage, try to get your Dopplegangsters to at least 5/5, so they can’t be cleared by Flamestrike; against Priests, Shamans and Warlocks, go for 6/6 to counter Dragonfire Potion, Elemental Destruction and Felfire Potion respectively; against everything else, 4/4 should be enough.

Upon arriving in Gadgetzan, there were many Warriors who sailed in as Pirates. These no-good swashbucklers raid and pillage the Gadgetzan docks, slaying those who stand in their way. After a large shipment of weapons was hijacked by these scallywags, Don Han’Cho ordered the Warriors under his command to go out and protect his investments.

Mid-Range Warrior is a deck with

one goal: defeat the ever-present Pirate Warrior. This goal is accomplished by playing a lot of Taunt minions that are buffed by cards such as Stolen Goods or the Grimy Gadgeteer.

Because of how early you can get taunts onto the board (as early as turn 2 in many occasions), this deck can stall Pirate Warrior long enough to draw into powerful board clears such as the Ravaging Ghoul.

Public Defender and Alley Armorsmith are the main Taunt minions the deck plays, but it also runs a copy of Bloodhoof Brave for a little extra consistency. To buff these minions, the deck runs one copy of Stolen Goods, a copy of Grimestreet Smuggler, a pair of Grimy Gadgeteers and Don Han’Cho himself.

The Pros: This deck is spectacular against Pirate Warrior and other Aggressive Decks that don’t run a lot of hard removal.

The Cons: Struggles a bit in the late-game against control decks and Jade Golem Druid.

Notes: I’ve been running Varian Wrynn to give me some late-game tempo against very aggressive decks. He has a tendency to be hit-and-miss, however, so you’ll probably want to replace him with Garrosh Hellscream in most cases. (I don’t have Garrosh, or else I’d do this too. I haven’t been running Bolster, because it would rarely hit more than one minion, and that’s not good enough.

These are the decks I’ve mainly played so far, but I’m sure I’ll create many more over the next few weeks. Hopefully, this article has given you some ideas for your own deckbuilding, and I’ll see you on the Mean Streets of Gadgetzan.