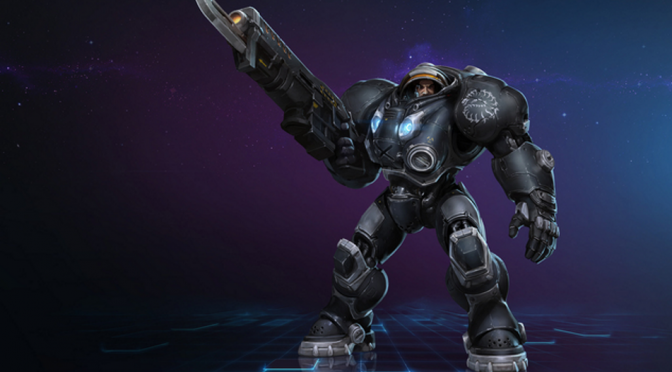 Hero Overview is a series that introduces readers to the Heroes of the Storm. This time, we’re going to be talking about Raynor, the auto-attacking assassin from the StarCraft Universe.

James Raynor used to be a simple marshal on the planet of Mar Sara, but after an attack by the fearsome Zerg, Raynor joined the Sons of Korhal—a revolutionary group led by the enigmatic Arcturus Mengsk—and everything changed.

Recognizing Raynor’s natural aptitude for command, Mengsk chose the former marshal to lead a recently formed brigade. Mengsk’s trust was not mislaid, as Raynor proceeded to lead his squad successfully in battle after battle against the tyrannical Terran Confederacy.

A couple weeks later, on the way to an important mission, Raynor met Mengsk’s second-in-command, a Terran Ghost (super-soldiers possessing psionic powers) named Sarah Kerrigan. This first meeting was cold at best, however, over time the pair grew closer and closer, eventually falling in love.

Unfortunately, this romance was not to be. During an attack on Tarsonis—the capital of the Terran Confederacy—Mengsk unleashed an army of Zerg upon the helpless populace of the planet. Near the end of the battle, Kerrigan was trapped on the doomed planet and, to Raynor’s horror, Mengsk gave the orders to abandon the Ghost to her fate.

Raynor attempted to rescue his love, but it was to no avail—Kerrigan had already been taken by the Zerg. Disgusted by Mengsk’s betrayal, Raynor and his soldiers left the Sons of Korhal and formed their own group, Raynor’s Raiders.

Since then, Raynor and his Raiders have gone on numerous adventures across the Koprulu sector, battling the Zerg, Protoss and Mengsk’s Terran Dominion. Now, this stalwart warrior has come to the Nexus to defend the weak and destroy his foes.

Raynor’s trait is Advanced Optics, which increases his auto-attack range by 20%, and his sight range by 10%. This allows Raynor to deal damage at a greater distance than nearly anyone else, so he can stay relatively safe during heated fights. 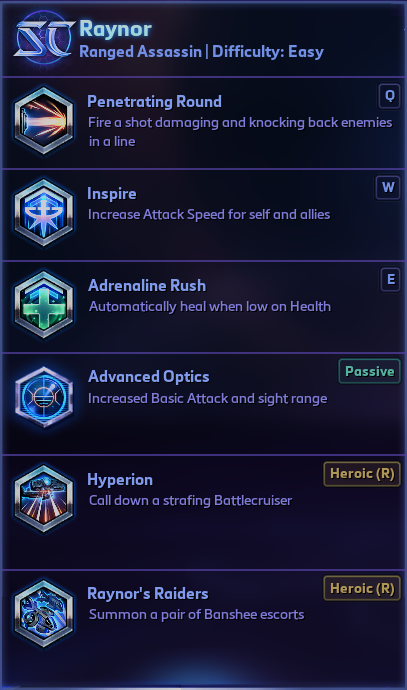 Penetrating Round, which deals heavy damage and knocks away all enemies it hits. This attack is good at keeping melee focused heroes pushed back as he pours hot lead into them with his auto-attacks.

Raynor’s second basic ability is Inspire, which increases his attack speed by 25% for 8 seconds. Nearby allies—including minions and mercenaries—gain half of this bonus. Inspire is one of Raynor’s most important abilities, because virtually all his damage is dealt through auto-attacks.

Raynor’s third and final basic ability is Adrenaline Rush, a passive ability that automatically heals him for a substantial amount of his health whenever he drops below 30% health. Thanks to Adrenaline Rush, Raynor can absorb much more damage than other Ranged Assassins, making him surprisingly hard to kill in team fights.

Raynor’s first ultimate is Hyperion, which summons a massive Battlecruiser to strafe your enemies. Firing energy bolts at 4 targets every second for 12 seconds, the Hyperion is able to do severe damage to an enemy team. In addition, the Hyperion also has a massive Yamato Cannon that deals over 1000 damage to structures every couple seconds.

Raynor’s second ultimate is Raynor’s Raiders, which summons a pair of cloaked Banshees (little fighter ships) that attack a targeted enemy for 22 seconds. This ability is great for chasing down enemy heroes with low health, so it should never be underestimated.

Raynor is a powerful Ranged Assassin who deals damage through his auto-attacks. Using the extra range provided by his trait, Raynor hovers on the edge of battle, dealing heavy damage to any targets who get into range. If a tank or melee assassin tries to jump Raynor and take him out of the fight, Raynor uses Penetrating Round to shove his attacker back.

Raynor is also a very effective laning hero, as he can use Inspire to increase the power of his minions and mercenaries. Penetrating Round is also very effective at dealing damage to enemy minion waves, and Raynor’s high-powered auto-attacks allow the Terran Commander to easily clear out enemies.

Raynor will often pick talents such as Seasoned Marksman (which increases attack damage and eventually attack speed) and Giant Killer (which deals bonus damage based on the target’s health pool). Executioner (bonus damage to stunned and slowed targets) and Nexus Frenzy (extra attack speed and range) are also great talents to choose, as they add even more power to Raynor’s auto-attacks.

Thanks to his powerful sustained damage and increased range, Raynor is very strong against Warriors such as Stitches or Diablo. He’s also quite good against Melee Assassins such as Greymane or the Butcher, thanks to his knockback (Penetrating Round) and his heal (Adrenaline Rush).

Unfortunately, even with Adrenaline Rush, Raynor doesn’t have a huge amount of health. As a result, the hero is very vulnerable to burst assassins such as Jaina, Kael’thas and Li-Ming. There aren’t too many of these characters in the game, however, so Raynor will often be just fine.

Overall, Raynor is a very powerful hero. His damage potential is one of the highest in the entire game, and best of all, he’s a very easy hero to learn. So if you’re new to the game, I highly recommend checking him out—you won’t be disappointed.