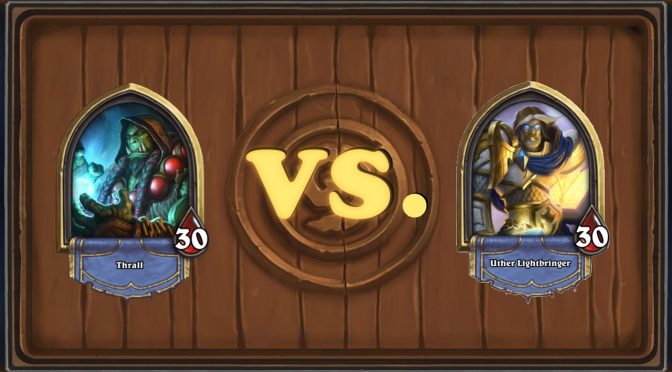 “Ladies and Gentletrolls—welcome once more to da Gurubashi arena! I be Dar’jin Longtusk, and I be excited ta bring ya anodder excitin’ match. Today, we be seein’ a battle widdout equal, as two mighty warriors go face ta face!”

The announcer troll pointed to the Arena’s sandy floor, where a human clad in golden armor and carrying a massive hammer was standing. “Today’s challenga be Uther, a Paladin of da Silver Hand,” the troll proclaimed, “Dis may be his first visit to our Arena, but even I’ve heard of his reputation as a strong and mighty champion of da Light.”

The crowd cheered as Uther held his hammer aloft and declared, “I fight with honor!”

Waiting a moment for the noise to die down, the troll turned to the Arena’s entrance and announced, “And now, please welcome our reignin’ champion and leader of da Earthen Ring, Thrall!” Raucous cheers poured forth from every mouth as a tall, green-skinned orc stepped through the entranceway. The orc carried a giant stone hammer in one hand, while his other crackled with intense energy.

“For Doomhammer!” Thrall roared, raising the aforementioned weapon. “For the Frostwolves!” The cheers of the crowd grew even louder—if that were even possible—and they didn’t subside until nearly a minute after the orc had taken his place across the Arena from his human opponent.

“Two warriors enter, but only one leaves,” Dar’jin proclaimed, “Let da battle begin!” Immediately, a hush fell over the Arena, as everyone gave their full attention to the battle before them. 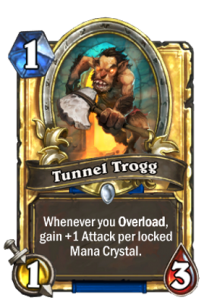 For several moments, the two combatants eyed each other warily, but then Thrall raised his arm and made a slight gesture. Immediately, one of the doors at the Arena’s edge opened, and a short, barrel-chested creature with a sharp stone hatchet came charging out onto the Arena floor. “Troggs rule!” the little humanoid (commonly known as a Tunnel Trogg) announced, skidding to a halt in front of its master. “Troggs rule!”

From the other side of the Arena, Uther narrowed his eyes, observing this first threat with concern. “It appears dat our challenga don’ know what ta do,” the troll announcer helpfully commented. “Da Tunnel Trogg be too much for him.”

Indeed, this appeared to be the case, as Uther stared at the lone Trogg in apparent indecision. Several moments passed, but then the paladin’s eyes brightened as he got an idea. Reaching into the coin purse at his waist, Uther withdrew a single gold coin and tossed it over to the tunnel on his side of the Arena. Instantly, the wooden door was pushed open, and a blood elf clad in bright red robes strode out and yelled, “The End is Coming!” 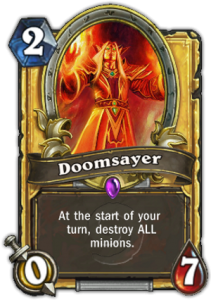 “Well, dis be a bold play,” Dar’jin stated, watching the proceedings with interest. “It appears dat Uther be putting his fate in de hands of da Doomsayer. Now, Thrall has ta make a decision: kill da Doomsayer, or let him go off. This be a tough choice, and…”

The announcer’s statement turned out to be incorrect, for even before he had finished speaking, Thrall barked an order and the Tunnel Trogg charged at the human paladin. Raising his hammer, Uther blocked the blow, but the sheer force of the charging Trogg knocked him back several steps.

Regaining his balance, the paladin slammed the Trogg with his hammer, knocking the creature away. Hissing, the ugly humanoid prepared to attack again, but before he could, the Doomsayer yelled, “I knew it!” An expression of horror crossed the Trogg’s face for a split second before both he and the Doomsayer were engulfed in giant burst of flame.

“Well, da end has come for dat Trogg,” the troll announcer proclaimed. “Now, it be up ta Uther ta decide which of his allies he’ll summon next.” Unlike Thrall, the human paladin was taking his time in making a decision, and nearly a minute and a half passed before Uther’s gates opened again, and a lightly armored Silver Hand Recruit charged out. 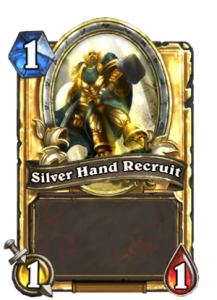 “Reporting for duty,” the young paladin saluted before taking his place in front of his commander. Nodding gratefully at the Silver Hand Recruit’s quick response, Uther looked back at Thrall, ready for whatever his opponent was planning.

Once again, Thrall was not long in making up his mind, and raising the mighty Doomhammer, he barked yet another order. Immediately, the doors on his side of the Arena opened—and a blubbery Tuskarr Totemic stepped out. “Did you bring some fish?” he asked his commander curiously. Thrall shook his head, and the Tuskarr let out a sigh.

“So, we have a Tuskarr Totemic,” Dar’jin Longtusk proclaimed, “Now, we jus’ need ta see what he will summon.” Down on the Arena floor, the Tuskarr raised his hand, and a second later a massive ‘thud’ resounded throughout the entire structure as a massive creature appeared. “By da loa,” the announcer gasped, “Dat be a Totem Golem!” 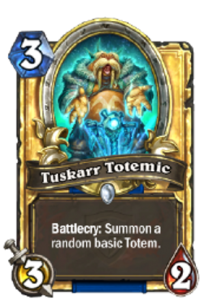 Raising his hands, Thrall let out a cheer at this incredible luck—but then, a gigantic foam mace dropped from the heavens and crushed the Totem Golem into splinters. “Whoa!” the troll gasped again. “Thrall’s amazing luck has been foiled by da power of da Nerf Hammer! The Tuskarr Totemic is trying ta repair his creation, but it looks like da best he can come up with is a Wrath of Air Totem. How embarrassing.”

Laughter rippled through the Arena at this turn of fortune, and with a smile Uther summoned his next ally. The gates opened, and with a loud “Mrglglrglglgl”, a Murloc Warleader marched out onto the battlefield and took its place beside the Silver Hand Recruit. 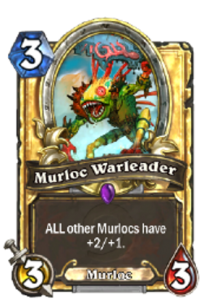 Waiting until the Warleader was settled, the Silver Hand Recruit yelled, “To Battle!” and charged across the field right at Thrall’s Wrath of Air Totem. With a loud ‘clonk’, the young paladin slammed his battle-hammer into the Totem, causing cracks to appear all over its wooden surface.

Satisfied for the moment, the Silver Hand recruit returned to his allies as Thrall pondered what he’d do in response. Several seconds passed, then a scowl crossed the orc’s face, and facing the doors he let out a primal yell. Immediately, a cloud of darkness began issuing from the tunnel, and a second later, a massive monster stepped out, murmuring “N 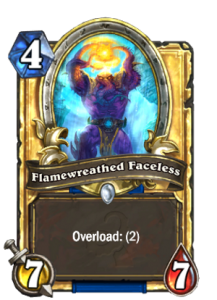 “Oh, no!” Dar’jin exclaimed, “Dat be da Flamewreathed Faceless, da most powerful Arena fighta in recent years. Dis guy alone be why Thrall is so powerful—so unless Uther can find a way ta deal with it, dis match be over right now.”