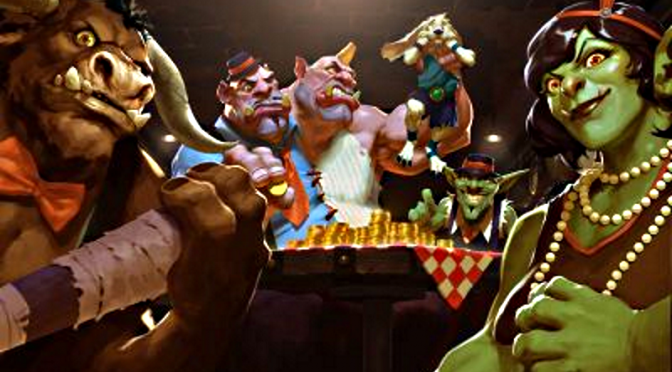 The Mean Streets of Gadgetzan expansion is fast approaching, and in the weeks prior to the launch Blizzard has been revealing all the new cards that are coming to the game. Each week attention will be focused on one of the three gangs—this week, that gang is the Grimy Goons.

Comprised of Paladins, Hunters and Warriors, the Grimy Goons are your typical Gangsters. They flaunt their power openly (unlike the other two gangs) and aren’t afraid to throw their weight around to maintain their idea of order.

In addition to the usual slew of basic cards, the Grimy Goons have a bunch of cards that share a brand new mechanic: the ‘holding’ mechanic, which buffs cards that are in your hand. 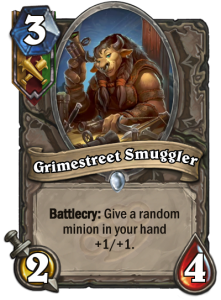 An example of a card that has this Mechanic is the tri-class Grimestreet Smuggler. A 3-mana 2/4, the Grimestreet Smuggler’s Battlecry gives a random minion in your hand +1/+1. This is a pretty powerful effect, as while you sacrifice some tempo by playing a 2/4 on turn 3, you gain those stats back on a future minion.

Now, while this mechanic is present throughout all the Grimy Goons, its impact and power varies depending on which class is being played.

In Hunter, the holding mechanic is focused around cards that are efficient plays for their mana. For example, they have the Trogg Beastrager, a 2-mana 3/2 (good stats for two mana) whose Battlecry gives a random Beast in your hand +1/+1. This effect isn’t as powerful as the Grimestreet Smuggler’s (because it’s limited t 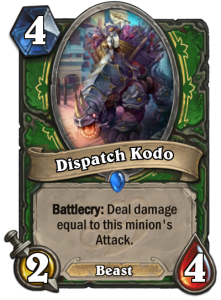 o a Beast), however its stats are better for the Mana Cost.

In addition, Hunter has the Dispatch Kodo, a 4-mana 2/4 with the Battlecry ‘Deal damage equal to this minion’s Attack’. At first, this just seems like an okay card—however, couple it with buffs from cards such as the Trogg Beastrager, and this minion becomes insane—dealing 3, 4 or even 5 damage when played.

Warriors utilize the holding mechanic in a similar way to Hunters, 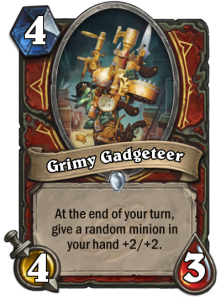 In addition, Warriors also have the Grimestreet Pawnbroker, a 3-mana 3/3 whose Battlecry gives a random weapon in your hand +1/+1. This is a very powerful effect, and even though it’s attached to a minion with a weak body, its effect more than makes up for the small tempo loss.

Finally, Warriors have the Stolen Goods, a 2-mana Spell that gives a 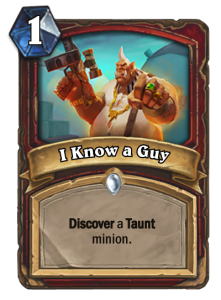 random Taunt minion in your hand +3/+3. Now, Warriors don’t usually run many Taunt Minions, however this card combos with I Know a Guy, a 1-mana Spell that lets you Discover a Taunt minion. This combination guarantees that you’ll always have a Taunt to buff, but you’ll be spending 3 mana to do nothing, so it’s a fairly weak play.

As far as minions that benefit from holding buffs, Warriors have the Alley Armorsmith, a 5-mana 2/7 with Taunt and an effect that says ‘Whenever this minion deals damage, gain that much Armor’. Now, at 2 Attack, this effect isn’t too powerful. However, if it gets buffed by the Grimy Gadgeteer or Stolen Goods, it’s actually a pretty powerful effect.

Paladins are at the complete opposite end of the spectrum from Hunters. Where Hunters have high-tempo cards with weaker 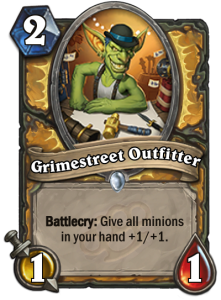 effects, Paladins have low-tempo cards with very powerful effects. For example, Paladins have the Grimestreet Outfitter, a 2-mana 1/1 with a Battlecry that gives all the minions in your hand +1/+1. Needless to say, a 1/1 on turn two is terrible tempo-wise, but its effect is incredibly powerful.

The next minion Paladins have is the Grimestreet Enforcer. A 5-mana 4/4, this minion gives all the minions in your hand +1/+1 at the end of your turn. Once again, this is a very powerful effect—though it is countered by the fact that it is very low tempo.

Finally, Paladins have Smuggler’s Run, a 1-mana Spell that gives all the minions in your hand +1/+1. This is possibly even better than the other two cards. Since it only costs one mana, the loss of tempo you take by playing it can be counteracted with a single buffed card. 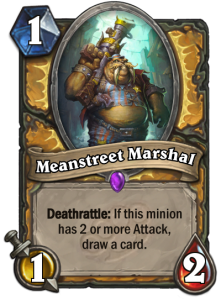 For the cards you’ll be buffing, Paladins have the Meanstreet Marshal, a 1-mana 1/2 that draws a card when it dies as long as it has at least 2 attack. Now, this minion actually has good stats for its mana cost, but if you play it on turn one, you’ll have trouble making use of its Deathrattle. However, this problem can be solved thanks to Small-Time Recruits, a 3-mana Spell that draws three 1-mana minions from your deck.

Small-Time Recruits allows you to fill your deck with weak 1-mana minions, pull them out on demand and then buff them with cards such as the Grimestreet Outfitter and Smuggler’s Run. Pull this off successfully, and you’ll have turns where you play 6 or 9-mana worth of stats for only 3 mana. Needless to say, that’s pretty insane. 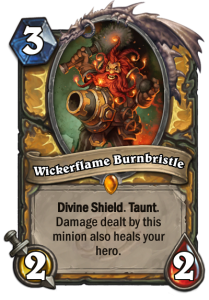 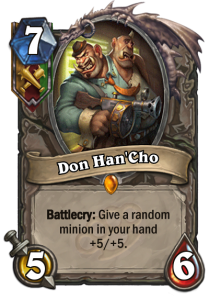 Because the Grimy Goons revolve around the holding mechanic, it only makes sense that their tri-class legendary would do the same. Enter Don Han’Cho, a 7-mana 5/6 that gives a random minion in your hand +5/+5. Now, a 5/6 is pretty bad for 7 mana, but when you consider the buff it gives, Don Han’Cho becomes a 7-mana 10/11, and that’s pretty good.

Overall, the holding mechanic is very, very strong, and it is likely to completely change the game as we know it today.