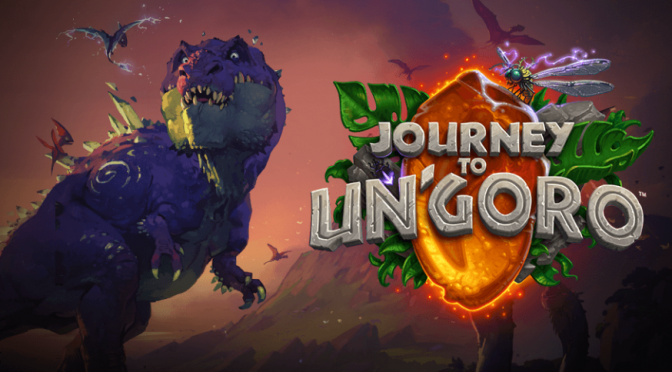 The Journey to Un’Goro expansion is here, and I’ve already started work on new decks. These four are the best I’ve come up with so far, and while they’re not quite perfect yet, I had a lot of fun playing them and I got several wins on the ladder.

Day 4—We arrived at the bubbling Lakkari Tar Pits this morning, where we discovered the remains of a primitive tribal ritual. After some examination from the Warlocks of our expedition, it was determined that the ritual’s purpose was to open a portal directly to the Twisting Nether!

The ritual had been unsuccessful, apparently due to a lack of life energy. The Warlocks suggested a way to ‘remedy’ this problem, but I firmly declined their offer, and we left the area shortly thereafter.

The first deck I played, Discardlock

centers around completing the Warlock class quest, Lakkari Sacrifice. Lakkari Sacrifice requires you to discard six cards, and if you do, you receive the powerful Nether Portal (which summons a pair of 3/2 Imps at the end of your turn). The Nether Portal cannot be destroyed—even with complete Board Clears like Twisting Nether—so once you get it out onto the board, you’ll gain a lot of tempo for the rest of the game.

Of course, because Discardlock focuses so heavily on discarding cards, there will be times when you lose important resources at the worst possible time. In addition, while the Nether Portal is a powerful tempo card, it isn’t an instant win condition like some of the other quests. As a result, there are a lot of decks that can out-value Discardlock in the long run.

The Pros: Very powerful early game, with lots of high-tempo minions. Once the quest is complete, constant pressure that lasts the rest of the game.

The Cons: Can struggle if important cards are discarded. The deck also runs out of cards very quickly, going into fatigue when its opponent still has fifteen or more cards remaining.

Notes: There are a lot of Discardlock decks that aren’t running the quest, in favor of a more aggressive list. These decks are good, but the quest is also quite powerful, so it’s up to the individual player to decide what they want to do.

Day 7—While most of the Paladins seem determined to track down the elusive Galvadon, there are some who have set their focus on the elementals who dwell in the Crater. These Paladins are…inexperienced, but their enthusiasm is unmatched, and they’ve successfully imbued many elementals with the power of the Light.

The Shamans and Mages in our party see the Paladins as nothing more than amateurs—I find their efforts quite interesting, however, and intend to keep a close eye on their progress.

The second deck I played, Elemental Paladin isn’t the most obvious archetype for the class. Despite this, the deck was actually surprisingly successful, due to a few interesting interactions.

The first had to do with the Servant of Kalimos, a 5-mana 4/5 that discovers an Elemental as long as you played an Elemental on the previous turn. Because of the occurrence bonus class cards get in discover effects Ragnaros, Lightlord (Paladin’s only Elemental) showed up nearly every time. Now, Ragnaros wasn’t always the best choice, but always having him as an option made a huge difference in many games.

The second had to do with combining Ozruk (a 9-mana 5/5 with Taunt that gains +5 Health for every Elemental played on the previous turn) with the Adaptation that grants immunity to Spells and Hero Powers. In most cases, Ozruk would get up to a 5/15 or higher, which is pretty hard to deal with when he can’t be targeted by Spells.

The third centers around the new Paladin Legendary, Sunkeeper Tarim. Because of all the little 1/2 Elementals received from cards such as Fire Fly and Igneous Elemental, Sunkeeper Tarim nearly always has a large board to interact with. This allows Elemental Paladins to get a lot of value against heavy decks like Jade Druid or Taunt Warrior.

The Pros: Very powerful tempo throughout the game, with a lot of big minions near the end (including up to 3 Ragnaros, Lightlords).

The Cons: A little weak against decks that can generate massive amounts of small minions quickly, such as Murloc Shaman and Quest Hunter.

Notes: While Sunkeeper Tarim is powerful, he can be replaced by a second copy of Tol’vir Stoneshaper if budget is an issue.

Day 11—Several of the Priests in our party have begun examining the rare beasts that inhabit the Crater. They seem fascinated in general by the creatures, but they are especially intrigued by the beasts’ rapid adaptations.

Applying what they have learned from their extensive time with Dragons, the Priests have begun to use their holy magic to influence the adaptations. So far, the results have been…interesting, to say the least, and I am eager to see what they come up with.

Adaptation Priest is a deck that uses Priest spells like Power Word:

Shield and minions such as the Kabal Talonpriest to empower Adapted minions. The deck’s main win condition is the Vicious Fledgling, a 3-mana 3/3 that Adapts every time it attacks a hero. If this card can stay alive for more than a turn or two, it quickly becomes unmanageable.

In the event that the Vicious Fledglings don’t succeed, this deck runs Ysera and two copies of Free From Amber (an 8-mana spell that Discovers a minion that costs 8 or more mana, then summons it) to help close out games.

In addition, there is a little bit of Dragon synergy in the deck, as well as a few tech cards such as Mass Dispel (to help deal with all the Taunts/Deathrattles/Adapted minions that have been inching their way back into the meta). These cards can be swapped out, however, as they aren’t crucial to the deck.

The Pros: This deck is very strong against opponents without any real means of targeted removal, such as Paladins or Druids.

The Cons: Is definitely a win-more deck, so it struggles to come from behind.

Notes: This is more a fun deck than a serious competitive deck, so it is unlikely to pick up a lot of wins at high ranks. That being said, it is a really fun deck to play, and it often catches players off-guard.

Day 13—The Shaman in our party have joined the Paladins in examining the Elementals. Unlike the Paladins, however, the Shamans have a lot of experience with mastering the Elements, and they quickly bound many of the most powerful Elementals to their will.

I have my reservations, however, about the Shamans’ methods. While the Paladins treaded carefully in their experiments with the Elementals, the Shamans have thrown caution to the wind. When I asked, they cited their years of experience in taming Elementals—however, the Elementals of Un’Goro are like nothing I’ve ever seen before, and I fear they might be in over their heads.

Control Elemental Shaman forgoes playing many of the smaller Elementals in favor of massive minions such as the Earth Elemental (a 5-mana 7/8 with Taunt that Overloads for 3). Once these minions are established, it then uses cards such as Ancestral Spirit and Faceless Shambler to maintain the wall.

In addition to the massive Taunts, this deck also runs a pair of Volcanos and Lightning Storms, which help keep the board clear of enemy minions. The deck also runs a lot of healing in order to survive early aggression.

The Pros: This deck is very strong against Aggro and Midrange decks, as its Taunts and healing allow it to survive long enough for its big minions to wreak havoc.

The Cons: Is very weak against decks with hard removal, such as Priest or Mage.

Notes: I don’t own Kalimos, so I didn’t include him in the deck. He fits the deck concept very well, however, so he would be a good inclusion.

These are the decks I’ve mainly played so far, but I’m sure I’ll create many more over the next few weeks. Hopefully, this article has given you some ideas for your own deckbuilding, and I’ll see you on the Journey to Un’Goro.