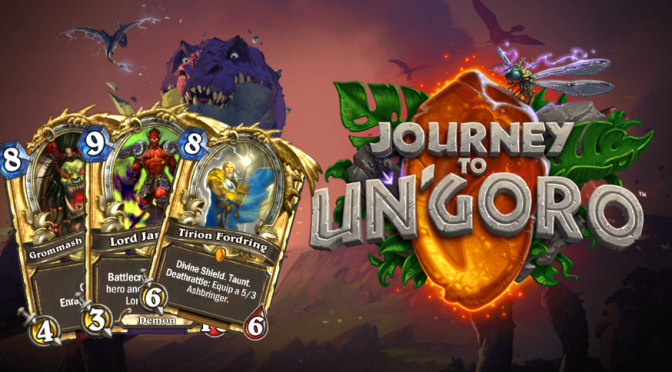 Hearthstone’s newest expansion, Journey to Un’Goro, is just around the corner. When it arrives, the Blackrock Mountain, Grand Tournament and League of Explorers expansions will be shifted out of Standard and be restricted to the Wild format. This will completely change the meta as we know it, as powerful cards like Emperor Thaurissan and Reno Jackson will no longer be playable.

In addition to the loss of Reno and the Emperor, a pair of Classic Legendary minions (Sylvanas Windrunner and Ragnaros the Firelord) will also be leaving Standard. As a result, there is now a power gap among the Legendaries, which means that some of the old Class Legendaries that have never seen much play (looking at you, King Krush) may now actually be viable.

There are some Legendaries, however, that greatly benefited from the existence of cards such as Emperor Thaurissan. For example, the Warlock Legendary Lord Jaraxxus is exponentially more powerful at a discounted 8 mana (where you can play him and get in a hero power on the same turn) than at his default 9 mana. Not all the Class Legendaries will be impacted this heavily by the Standard shift, but they will all be affected in one way or another.

Cenarius (a 9-mana 5/8 that summons a pair of 2/2’s with Taunt or gives all your other minions +2/+2) has experienced a very up-and-down ride over the history of Hearthstone. Back in the early days (when Ramp Druid was a popular and powerful deck) Cenarius was often played as a soft win condition. Since then, however, more powerful Druid cards have been released, and—aside from a short stint in the Token Druid deck popular around the time Whispers of the Old Gods was released—Cenarius has seen little to no play.

Now, however, Cenarius is primed to make his return, thanks to the introduction of the Druid Quest reward, Barnabus. Barnabus is a 5-mana 8/8 who makes all the minions in your deck cost 0. As the main barrier to playing Cenarius was his oppressive 9-mana cost, this is a huge change, and the Classic Druid Legendary will likely see play in any deck that runs the Quest.

King Krush (a 9-mana 8/8 with Charge) has always been a fairly weak Legendary, as he is basically nothing more than a more expensive Ragnaros. As a result, the Hunter Legendary has never really seen much play—except on the rare occasions that he’s acquired via a Webspinner or Ram Wrangler.

Now that Ragnaros is leaving the Standard format, however, King Krush might actually have his time in the sun. Eight instant damage is nothing to sneeze at, and with powerful removal tools such as Entomb leaving for Wild, the powerful Devilsaur could very well be the tool Hunters are looking for.

Ever since the beginning of Hearthstone, Archmage Antonidas (a 7-mana 5/7 who puts a Fireball into your hand every time you cast a spell) has been a staple in many Mage Decks. His ability to generate resources was unparalleled, and there are many games where Antonidas singlehandedly generated the resources needed to defeat the Mage’s opponent.

With the upcoming Standard Rotation, however, Mages are losing one of their most powerful spells, in the form of Ice Lance. Between this, and the loss of Thaurissan, Antonidas will struggle to produce more than one or two Fireballs before he’s killed off.

Overall, things look bad for the Archmage, and while he has some synergy with the Mage Quest (which requires players to cast 6 spells that didn’t start in their deck), it’s unlikely that he’ll see a lot of play.

The backbone of nearly every Paladin deck since the beginning, Tirion Fordring (an 8-mana 6/6 with Divine Shield, Taunt and a Deathrattle that gives the minion’s owner a 5/3 weapon) has always been a powerful card. He’s a powerful force on board, and when he dies, the weapon he grants can be used to control the board or finish off the Paladin’s opponent.

With the upcoming Standard rotation, Tirion’s main counters (Entomb and Sylvanas) are going to Wild, which means that the Paladin Legendary will be even more powerful than ever. In addition, Tirion synergizes very well with the Paladin Quest, as his main weakness is to Silence effects—which will likely have already been used to deal with the Buffs played earlier in the game.

Overall, Tirion is a great Legendary, and he will only get better in the upcoming Standard rotation.

Similarly to King Krush, Prophet Velen (a 7-mana 7/7 who doubles the damage and healing of the Priest’s spells and hero power) has never been an overly powerful Legendary. While his effect is good, Velen is overpriced, and he’s difficult to combine with other cards.

Unlike King Krush, however, Velen doesn’t really benefit from Ragnaros or Sylvanas leaving Standard, and there’s nothing in Journey to Un’Goro that boosts his power. As a result, Velen will likely remain a rarely-played Legendary for a while to come.

Like Tirion Fordring, Edwin VanCleef (a 3-mana 2/2 who gains +2/+2 for every card played earlier on that turn) has always been a highly-played Legendary. His effect is one of the most powerful in the game, and he synergizes very well with the general Rogue playstyle.

With the upcoming Standard rotation, however, Rogues are losing Conceal (which grants Stealth to all friendly minions for one turn). This is a huge blow to VanCleef, as it means that he can no longer be shielded from targeted removal. As a result, VanCleef will likely see a large drop in popularity for the first time in his entire Hearthstone career.

The Shaman Legendary, Al’Akir the Windlord (an 8-mana 3/5 with Windfury, Charge, Divine Shield and Taunt) has always lurked on the edge of playability. Whenever a new Shaman deck is created, Al’Akir will appear in early builds of that deck—however, in many cases, the Lord of Air will later be removed as the deck is optimized with cheaper, more powerful cards.

With the arrival of Un’Goro, however, Al’Akir is catapulted back into relevance, thanks to his acquisition of the Elemental tag. As Shaman is one of the classes to feature Elementals, there is a good chance that Al’Akir will make it into the new Elemental decks. It’s hard to say for sure—as he could end up getting dropped as the Elemental lists are optimized, but in general, things are looking up for everyone’s second favorite Elemental Lord.

A staple of his class, Lord Jaraxxus (a 9-mana, 3/15 who replaces your hero) has been a part of Control Warlock decks ever since the beginning. From Handlock to Renolock, Jaraxxus has been the win condition that every Warlock strives for.

With the upcoming Standard rotation, however, things are primed to change drastically for the popular Eredar Lord. Emperor Thaurissan is rotating out, which means that Jaraxxus can no longer be played on the same turn as a hero power. In addition, Journey to Un’Goro is pushing a heavy Discardlock theme (with both the Quest and the new Legendary), which happens to be a deck that doesn’t play Jaraxxus.

Because of these factors, there is a good chance that Lord Jaraxxus will no longer be playable in Standard. Jaraxxus is still a very powerful card, however, so it’s possible he survives the transition—only time can tell for sure.

Grommash Hellscream (an 8-mana 4/9 with Charge that gains +6 attack while damaged) has always been the finisher in Control Warrior decks. With the rise of Pirate Warrior and Jade Druid, however, he’s lost a lot of popularity, as he’s too slow to compete with these decks. This situation is looking to turn around, however, with the arrival of Journey to Un’Goro and the powerful Taunt minions it brings.

Thanks to all the new Taunt minions, Control Warrior should actually be able to hold its own against Pirate Warrior and other, similar Aggro decks. As a result, Grommash should once again see some play to help finish off all the new Midrange and Control decks that appear to be coming with the new expansion.

Overall, the future looks bright for many of the old Legendaries. While there are a few (Lord Jaraxxus and Edwin VanCleef) that got indirectly nerfed, there are more that only gained in power (King Krush, Cenarius and Al’Akir). As a result, the Classic Class Legendaries should see a rise in popularity amongst the dinosaurs and Elementals of Un’Goro.