The Mean Streets of Gadgetzan expansion is fast approaching, and in the weeks prior to the launch Blizzard has been revealing all the new cards that are coming to the game. Each week attention will be focused on one of the three gangs—this week, that gang is the Jade Lotus.

Comprised of Rogues, Shamans and Druids, the Jade Lotus are Gadgetzan’s spies and assassins. Need someone taken down? The Jade Lotus are the guys you call. For as long as anyone can remember, they’ve been content with this role—however, rumors have been going around that there’s been a change in philosophy among this faction’s leaders, and that the Jade Lotus is about to come out of the shadows to take their rightful place as the rulers of this city.

The Jade Golem mechanic is present throughout all the Jade Lotus classes, but the way it’s activated is different in each one.

In Rogue, the Jade Golem mechanic focuses around spells and stealthed minions. For Spells, Rogues have the Jade Shuriken, a 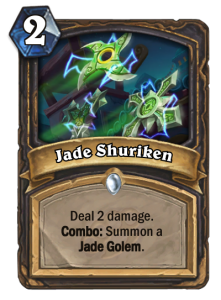 2-mana spell that deals 2 damage. If the Combo is enabled, however, it will also summon a Jade Golem. This card isn’t as powerful as Eviscerate in most Rogue decks, however in Jade Golem focused decks its power is much, much higher.

The other Jade Golem Rogue card that has been revealed so far is the Jade Swarmer, a 2-mana 1/1 that has Stealth and Deathrattle: Summon a Jade Golem. This card is difficult to predict power-wise, as its stats are a bit bad—however, the Deathrattle is actually very good, so the card might see some play.

The Rogue Legendary—Shaku, the Collector—is a Stealth minion, but it has nothing to do with Jade Golems, so it’s hard to see where exactly the Rogue archetype is going to be focused. There are still a lot of cards that haven’t been revealed yet, however, so we’ll just have to wait and see what happens in the future.

Ever since the launch of The Grand Tournament, Shamans have been pushed into the Midrange and Aggro Archetypes. With the arrival of Mean Streets of Gadgetzan, however, Shaman is finally getting some control tools, in the form of their Jade Golem Cards.

The first cards Shamans have is Jade Lightning, a 4-mana spell that deals 4 damage and summons a Jade Golem. Because of its higher cost, Jade Lightning isn’t a particularly good Aggro card, but the combination of removal and summoning a minion (likely a 2/2 or 3/3) is amazing for Control.

In addition, Shamans got the Jade Chieftain, a 7-mana 5/5 that summons a Jade Golem and gives it Taunt. In most cases, the Jade 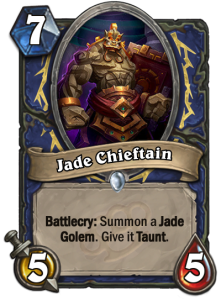 Golem it summons will be at least a 4/4 or 5/5, which makes this card an impressive 7-mana 9/9 or 10/10! Needless to say, this effect is super powerful, and will definitely help Shamans to control the board against more aggressive decks.

Finally, the new Shaman Legendary is White Eyes, a 5-mana 5/5 with Taunt and a Deathrattle that shuffles the Storm Guardian into your deck. Now, White Eyes’ stats aren’t too great, however the Storm Guardian he shuffles into your deck is a 5-mana 10/10 that also has Taunt. That’s pretty crazy value, which could be all that Control Shaman needs to become truly viable.

Out of the three Jade Lotus classes, Druid was pushed the furthest into the Jade Golem archetype with some very powerful new cards. The first is the Jade Blossom, a 3-mana spell that summons a Jade Golem and gives the Druid an empty mana crystal. This is the same effect as Wild Growth, but the fact that it also gives a Jade Golem makes it incredibly good. 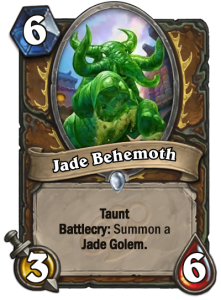 The next card they got was the Jade Behemoth, a 6-mana 3/6 with Taunt that summons a Jade Golem when played. Like the Jade Chieftain, Jade Behemoth’s stats aren’t very good, but the Battlecry by itself makes the card amazing.

The final Jade Golem card Druids get is the Jade Idol, a 1-mana spell that allows players to summon a Jade 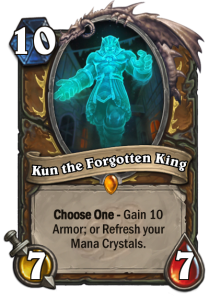 Golem or shuffle 3 copies of this card into their deck. This is a very powerful card, as it single-handedly prevents Druids from ever dying to fatigue again.

Finally, the Druid Legendary is Kun the Forgotten King, a 10-mana 7/7 that allows players to gain 10 armor or refresh their Mana Crystals. Needless to say, this is a very powerful effect, but it’s hard to say what archetype the card will fall under, so it’s impact on the meta is impossible to predict.

Like the other two gangs, the Jade Lotus has a special mechanic that their decks focus upon, so it’s only fitting that their tri-class Legendary revolves around that goal. Enter Aya Blackpaw, a 6-mana 5/3 with Battlecry and Deathrattle: Summon a Jade Golem. 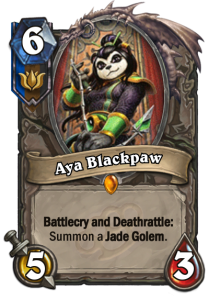 This is an insanely powerful effect, as Aya Blackpaw’s subpar 5/3 stat-line effectively becomes 12/10 or even higher depending on how many Jade Golem cards have been played up to that point. Even better, she can be brought back with N’zoth, which allows the Jade Golems to keep ramping up.

Overall, the Jade Golem mechanic seems very powerful, and will have a huge impact on the meta when the expansion releases.