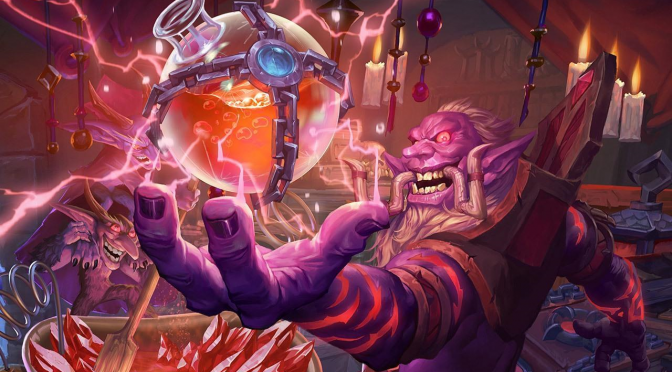 The Mean Streets of Gadgetzan expansion is fast approaching, and in the weeks prior to the launch Blizzard has been revealing all the new cards that are coming to the game. Each week attention will be focused on one of the three gangs—this week, that gang is the Kabal.

Comprised of Priests, Mages and Warlocks, the Kabal are Gadgetzan’s main magic users. Hiding away from the prying eyes of the Grimy Goons, the Kabal hoard all the Mana they can get their hands on. No one knows for sure what this Mana is used for, but there are rumors of an underground alchemy lab where Kazakus—the leader of the Kabal—brews up a host of diabolical potions.

In addition to the usual slew of basic cards, the Kabal have a bunch of cards that focus around two mechanics—Potions and Highlander decks (where you have no duplicate cards in your deck). 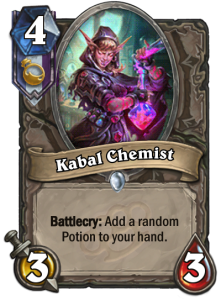 For the most part, Potions are just basic spells, similar to what has been released in previous expansions. However, there are some cards that interact specifically with Potions in a way that hasn’t really been seen before. For example, there is the Kabal Chemist, a 4-mana 3/3 that adds a random Potion to your hand when it’s played. Because Potions tend to be better than the average spell, this minion’s effect will be pretty good most of the time.

The second mechanic present across many of the Kabal’s cards is the Highlander (or no duplicate theme). Cards with this effect are generally weak for their mana cost, but if the conditions for playing the card are met, these cards suddenly become some of the most powerful in the game.

Now, while these mechanics don’t vary quite as much between the classes as the Grimy Goons’ holding mechanic did, there are still some pretty big differences.

In Priest, the Potions revolve around the Control archetype, and 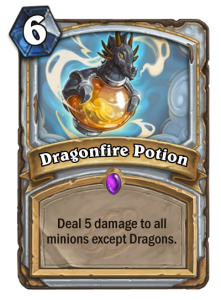 they help fulfill this goal in many ways. On the Board Clear side, they have the Dragonfire Potion, a 6-mana spell that deals 5 damage to all minions that are not Dragons. This is a very powerful Board Control Spell unless your opponent is running a Dragon deck, in which case Dragonfire Potion will do absolutely nothing. 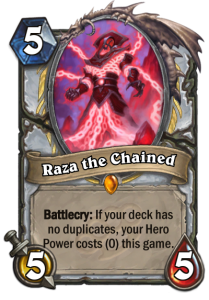 As far as the Highlander effect goes, Priests have the Legendary Minion Raza the Chained. A 5-mana 5/5, Raza the Chained causes your Hero Power to cost 0 for the rest of the game as long as your deck has no duplicates. Needless to say, this is an incredibly powerful effect, as it allows the Priest to always be able to heal no matter how much mana he uses.

Mages don’t have quite as much subtlety to their Potions as Priests have, however that doesn’t make them any less powerful. The first 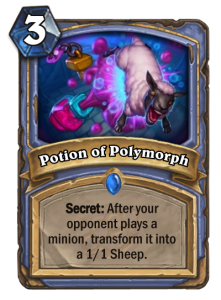 Potion Mages have is the Volcanic Potion, a 3-mana Spell that deals 2 damage to all minions. Mages have plenty of Board Clears already, but this card will still likely see some play.

The other Potion Mages have is the Potion of Polymorph, a 3-mana Secret that transforms the next minion your opponent plays into a 1/1 Sheep. Needless to say, this is a terrifying effect, and its very presence will often force your opponents to play weaker minions to ensure that their powerful Legendaries aren’t Sheeped.

Similarly to Priests, the 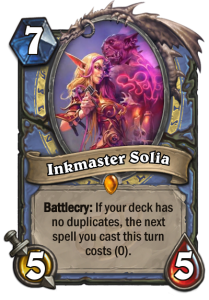 Highlander Mechanic shows up in the Legendary. Named Inkmaster Solia, the Mage Legendary is a 7-mana 5/5 that makes the next Spell you cast completely free, as long as you have no duplicates in your deck. This is possibly even more powerful than Raza the Chained’s effect, since being able to play a Pyroblast for free on turn 7 along with a 5/5 minion is absolutely insane for Tempo.

Warlocks also got some very powerful cards—however, for the first time in several expansions, the majority of them were focused on Control, rather than Zoo. For example, Warlocks got the Felfire 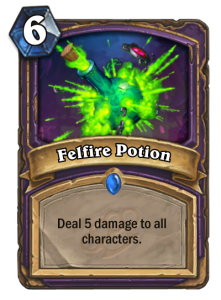 Potion, a 6-mana Spell that deals 5 damage to all characters. This has no place in a Zoolock deck, but fits perfectly in a Control-style deck.

Warlocks also got the Bloodfury Potion, a 3-mana Potion that gives a minion +3 Attack, and in some cases, also gives the minion +3 Health. This is more aggressive than the Felfire Potion, but it’s still too slow for the average Zoolock.

As far as Highlander Cards go, it’s impossible to say, because Warlock Legendary wasn’t revealed this week. Once it does get revealed, however, we’ll update this section to mention it.

Unlike the Grimy Goons, the Kabal have two main features that their decks center around: Potions and No-Duplicates. As a result, their tri-class Legendary—named Kazakus—puts both aspects of this 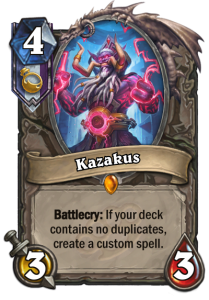 gang into one card. A 4-mana 3/3, Kazakus has a Battlecry that allows players to create their own custom Potion, as long as they have no duplicates in their deck.

These potions are created through a series of three Discover mechanics. The first one decides the cost (1, 5 or 10 Mana). The second adds an ingredient, and the third adds a second ingredient. These ingredients decide what the potion does, and include things such as:

Goldthorn – Give your minions extra health.

Felbloom – Deal damage to all minions.

Ichor of Undeath – Summon friendly minions that died this game.

These effects scale depending on how high the mana cost is, so at 10 mana, you’re looking at a pretty powerful potion. However, a 1-mana potion will still be very powerful for its mana cost, which potentially makes Kazakus the best card in the game.

Overall, the Kabal seems like a worthy contender to the Grimy Goons, and I can’t wait to see how they perform.